The logo of BRAMS Institute has been derived from our coat of arms, created by Maia Nadareishvili on 17 January 2019. The arms were officially granted on 27 May 2019. The logo, along with the colours navy blue and white, is used extensively on Institute signage, documents, printed materials, promo souvenirs, online data, etc. 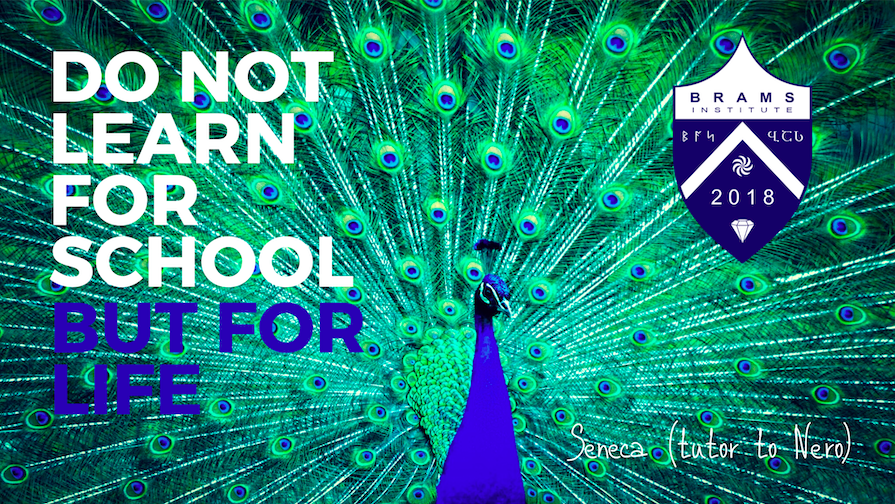 The logo of the BRAMS Institute has the shape of a shield. The elements of the logo are Borjgali, diamond, Anglo-Saxon Futhorc runes, Georgian Asomtavruli letters, the title of the Institute and the year of its establishment.

The field of the shield is partly navy blue, partly white.

Borjgali represents ideas of freedom and eternity. It, also, is an ancient Georgian symbol of the Sun with seven rotating wings. According to some scholars, the word 'Borjgali' is derived from the Megrelian word 'barchkhali', which literally means 'bright light, or shining brightly'. Other scholars suggest that the word originates from the old Megrelian words 'borj' ('time') and 'gal' ('pass' or 'flow') and thus, it can mean 'the flow of time'. Nowadays, this symbol is widely used on Georgian ID cards, passports, and driving licences. Additionally, it is commemorated on the Georgian national currency – the Lari banknotes and the tetri coins. Finally, Borjgali is the official mascot of the Georgian Rugby team.

A diamond of brilliant-cut is another symbol used on the logo of the BRAMS Institute. Diamond as the material has exceptional physical characteristics. Most notable are its extreme hardness, thermal conductivity, wide bandgap, and high optical dispersion. Diamond as a precious stone is the symbol of intellectual knowledge. Therefore, the idea of a diamond is connected to its invincible spiritual power, perfection and commitment in exploring, learning, researching, and studying.

There are three runes on the left side of the shield: B (beorc – birch), A (ac – oak), and S (sigel – sun). These are an Anglo-Saxon variant of runic alphabet Futhorc used 400-1000 AD. Each letter symbolises one of three main countries – Britain, America, Sakartvelo (Georgia the country) – that BRAMS Institute studies, researches and promotes worldwide.

There are three Georgian letters from Asomtavruli (Mrgvlovani) alphabet on the right page of the shield: Ⴁ, Ⴀ, Ⴑ (B, A, S). The meaning of these letters is similar to the runes presented. Asomtavruli means ‘capital letters’. Despite its name, this script is unicameral. Bir el Qutt and the Bolnisi inscriptions are the oldest Asomtavruli inscriptions found so far, dated from the 5th century AD. Asomtavruli alphabet is also known as 'Mrgvlovani', which means 'rounded', due to smooth, rounded shapes of its letters.

The motto of the BRAMS Institute is "Non scholae sed vitae discimus" ("Do not learn for school but for life"). This phrase, taken from Lucius Annaeus Seneca, has been in use since September 2018. There are several educational institutions that use Seneca's quote as their motto. BRAMS Institute has no hesitation to share the honour with them.