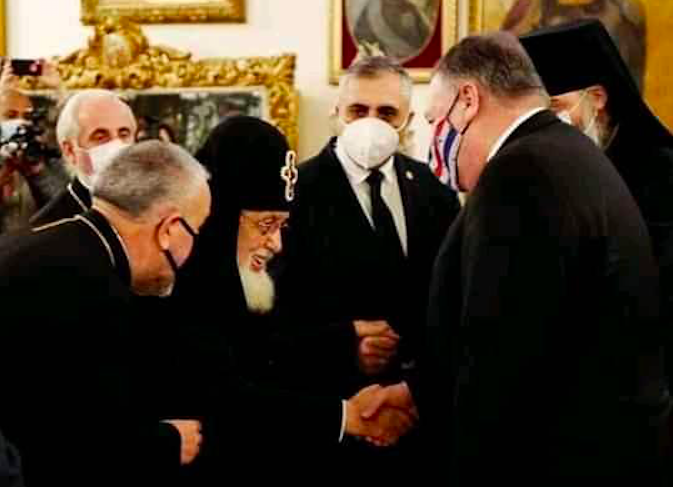 Secretary Pompeo is on a 10-day, seven-nation trip to Europe and the Middle East that will focus on counterterrorism and religious freedom. His itinerary includes official visits to France, Turkey, Georgia, Israel, the United Arab Emirates, Qatar, and Saudi Arabia from 14 to 23 November. Right before he departed Joint Base Andrews en route to Paris, France, the Secretary wrote on Twitter: "Looking forward to engaging with my counterparts on a number of issues, from promoting religious freedom to countering terrorism and Iran’s destabilizing behavior".

The first stop was Paris, where the Secretary met with President Emmanuel Macron, Foreign Minister Jean-Yves Le Drian, and other senior officials "to build on our transatlantic work on economic and security matters, and on counterterrorism and global threats".

Following France, the top US diplomat travelled to the commercial capital of Turkey, where he had a meeting with His All Holiness the Ecumenical Patriarch of Constantinople, Bartholomew I. The two have discussed the issues of religious freedom in the region and around the world. Pompeo spent about an hour and a half at the Orthodox Christian Patriarchate of Constantinople in the Fener neighborhood of Fatih (Turkish for "conqueror"), the capital district of Istanbul.

Then the Pompeos paid a visit to Rüstem Pasha Mosque in the Tahtakale neighborhood of Fatih that was designed by Ottoman imperial architect Mimar Sinan for the grand vizier Rüstem Pasha – the husband of Mihrimah Sultan, the famous daughter of Suleiman the Magnificent and Hurrem Sultan).

While in Istanbul, Secretary Pompeo also met with Archbishop Paul Fitzpatrick Russell – the Apostolic Nuncio to Turkey, Turkmenistan, and Azerbaijan – "to discuss how the United States can support interfaith peace efforts in this region".

An overnight stay at Tbilisi Marriot Hotel in the capital city of Georgia was part of the Secretary's tour. His plane landed at Tbilisi International Airport soon after 20:00 local time on 17 November, where Mr and Mrs Pompeo were welcomed by Foreign Affairs Minister Davit Zalkaliani, US Ambassador to Georgia Kelly Degnan, and Georgian Ambassador to the United States Davit Bakradze.

Soon after his arrival, the Secretary tweeted that he was thrilled to be in Tbilisi. "The United States and Georgia have a strong relationship built upon our shared commitment to freedom and independence. We are committed to helping Georgia deepen its Euro-Atlantic ties and strengthen its democratic institutions", wrote Secretary Pompeo on Twitter.

During his last stop in Europe, all official meetings were held on 18 November in Tbilisi. The Secretary met with the President of Georgia Salome Zourabichvili at the Orbeliani Palace. According to the information released by the US Embassy to Georgia, during "the meeting, the Secretary reaffirmed the United States’ commitment to Georgia’s sovereignty and territorial integrity and commended the country for its significant contributions to the fight against global terrorism".

Then he had a meeting with the Prime Minister of Georgia Giorgi Gakharia and the Minister of Foreign Affairs David Zalkaliani at the Governmental Administration. According to the official statement released by the US Embassy to Georgia, Secretary Pompeo discussed "the United States’ support for Georgia’s Euro-Atlantic aspirations and strengthening democratic institutions in the country. The Secretary also emphasized the importance of electoral and judicial reform". According to the press release by the Georgian Prime Minister's office, Secretary Pompeo said: "We have been wonderful friends for 30 years. We support you on democratic issues and we work together on issues related to the pain and hardship related to the occupation of your country".

The Secretary spent the late afternoon with representatives of the civil sector. According to the information released by the US Embassy in Georgia, "The Secretary noted Georgia’s recent judicial reform efforts and the important role of civil society in advancing the rule of law and developing modern state institutions. However, all agreed there is more work to be done, and the United States stands ready to continue its support. Included in the meeting were representatives of some of the many professional NGOs dedicated to improving Georgia’s democracy".

US Assisting Secretary of State Philip Reeker had an afternoon meeting with the Georgian opposition on 18 November. The same day, the senior State Department officials called on the Georgian opposition to enter parliament and use their constitutional rights to further the progress that the current government of Georgia started last summer: "they did these constitutional changes that resulted in a more proportional electoral system. And that electoral system, that new system, actually worked. They have a more diverse parliament than they’ve ever had before with nine parties that represent much more diverse perspectives and views... And some of the problems that we saw this election can be – should have been – included in electoral reform that was done during the summer. The opposition was boycotting parliament so that electoral reform was not as strong and forceful as it might have been, had they been part of the process of change within the parliament.  So to see them calling for a boycott again is like watching the same movie again. We’re encouraging them to go into parliament, do electoral change that’s meaningful so that the next elections will be better ".

From the capital of Georgia, Michael Pompeo headed to Israel where he will meet with Prime Minister Benjamin Netanyahu to discuss the Abraham Accords – which normalised relations between Israel and the United Arab Emirates as well as with other Arab countries, eventually – and the joint efforts to "address Iran's malign activities". Michael Pompeo is going to become the first US Secretary of State to visit a Jewish settlement of Psagot in Samaria, a disputed West Bank territory controlled by Israel.

The next stop is planned to the United Arab Emirates where the Secretary will meet with Abu Dhabi Crown Prince Mohammed bin Zayd "to discuss security cooperation and regional issues".

Secretary Pompeo is also due to visit Qatar where he plans to meet with Emir Tamim bin Hamad al-Thani, and Deputy Prime Minister and Minister of Foreign Affairs Mohammed bin Abdulrahman al-Thani "to discuss bilateral and regional issues, including the importance of Gulf unity".

The Secretary’s final stop will be in Saudi Arabia, where Michael Pompeo will meet with Crown Prince Mohammed bin Salman.