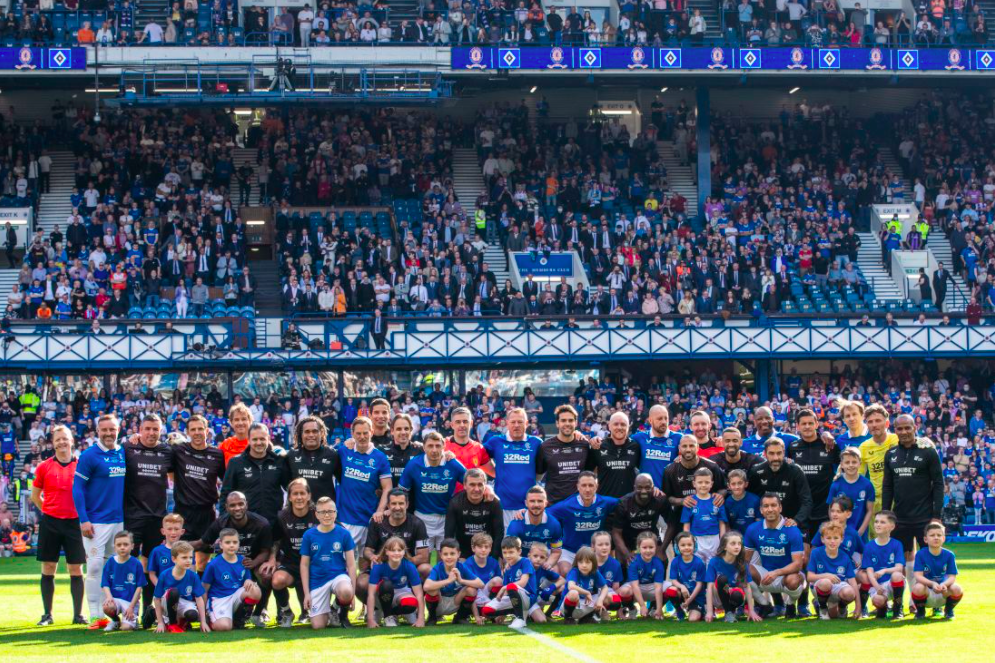 The star-studded clash started at 3 pm GMT on 26 March 2022 and was not aired on TV. For obvious reasons, tickets were in high demand, being sold to season ticket holders, priced at £22 for adults, £13 for concessions, and only £5 for juniors. The legends rolled back the unforgettable fantastic years for the mesmerized crowd of just over 38,000 while Alex McLeish managed the Gers one more time.

World football icon Luís Figo captained a galaxy of superstars against a Rangers Legends team at Ibrox stadium. Commenting on the announcement, Luís Figo said: “I have many fond memories of Glasgow thanks to winning the UEFA Champions League there in 2002 and the Weekend of Legends at Ibrox is set to be another memorable occasion. I’m looking forward to captaining a team that will include former World Cup, Champions League and Ballon D’Or winners and best of all, the weekend will raise important funds for my foundation which supports children around the globe".

Shota Arveladze, 49, a Georgian professional football manager and former player at Dinamo Tbilisi, Trabzonspor, Ajax, Rangers, AZ, Levante, and current manager of EFL Championship club Hull City, was named for both Rangers Legends and Luis Figo's World Stars teams. At the very end of the first half (38 mins), the noted Georgian footballer opened the score with a stunning header from Ronald de Boer’s cross, sanding one of his best signature balls into the top corner. 1:0!

In the second half (53 mins), Carlos Marchena headed the ball past Neil Alexander from a wonderful Kaka cross. 1-1!

Shortly after (60 mins), World Legends got the leading goal when Nuno Gomes managed to slot another past Neil Alexander from a brilliant Figo pass. 1-2!

15 minutes to the end of the game (75 mins), Luis Figo’s squad made it 1-3 when Ricardo Quaresma finally found the net with the outside of his right boot after countless attempts throughout the match and bent a beauty into the corner.

At 77 mins Paul Gascoigne entered the pitch as the nine-in-a-row legend made his long-awaited return to Ibrox. Within three minutes (80 mins) the legendary Gazza scored the final goal, sending a ferocious ball from within the World Legends box past David James to end the scoreline 2-3 and won Man of the Match.

As part of the celebration, Rangers made a donation to the Luís Figo Foundation, which was established in 2003 to support education, health and sports for children and young people across the world.

Portuguese Legend Luis Figo spoke to RangersTV after the victory for the World XI against the Rangers Legends.

After the memorable game, a special dinner took place on the Saturday evening of March 26.