A course in Cybersecurity Management 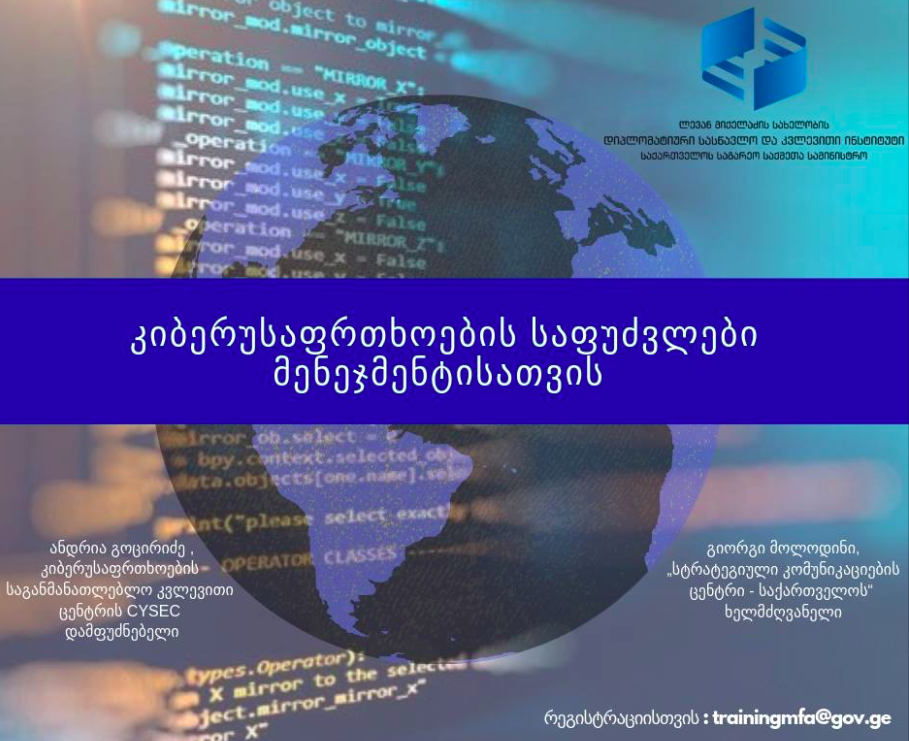 A course in Cybersecurity Management starts on 25 January.

Levan Mikeladze Diplomatic Training and Research Institute presents Andria Gotsiridze and George Molodini, two lecturers with solid experience in the field they are eager to share with the wide audience of professionals and people interested in modern aspects of cybersecurity, its principles and management.

Andria Gotsiridze is an internationally acclaimed cyber strategy consultant and researcher, the founder of Cyber Security Studies and Education Centre CYSEC. His professional experience embraces over 20 years, including positions such as the Head of division at the State Military Scientific-Technical Centre DELTA, the Head of various departments at the Foreign and Military Intelligence services in 2001-2008, the Director of the Cyber Security Bureau in the Georgian Ministry of Defence (MoD) in 2014-2016, and the Inspector General in 2012-2014. In 2008-2012 Mr Gotsiridze switched his career to the private sector, supervising the Security Department of JSC PrivatBank (Ukraine) and JSC Bank Constanta (Georgia), including IT security, operational risks, antifraud management, internal security, and integrity checking. He played a key role in developing the first Cyber Security Policy and Strategy of Georgia within the Cyber Security Bureau. He initiated several cybersecurity projects. Also, he assisted the project of employing former soldiers, wounded during the international missions, as cybersecurity trainers. Mr Gotsiridze is a lecturer at Caucasus University and International Black Sea University, where his Civil Servant Course is organised by GFSIS (Rondeli Foundation). He co-authored the Cyber Security Generic Reference Curriculum, published by NATO PFPC in 2016.

George Molodini is the head of Strategic Communications Training Centre, the founder of the Russian Research Institute of Georgia, author of articles about security issues.

The tuition fee is 270 GEL. The classes will be held three times a week. Please feel free to contact Ms Tamar Mangoshvili by email at training@mfa.gov.ge

Registration for this course ends on 22 February 2019.