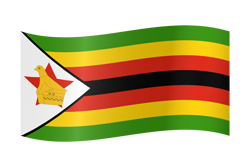 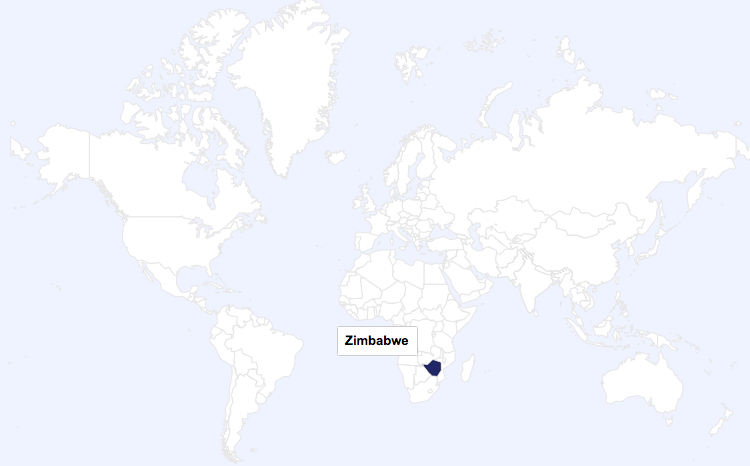 Zimbabwe, officially the Republic of Zimbabwe, is a landlocked country located in southern Africa, between the Zambezi and Limpopo Rivers, bordered by South Africa, Botswana, Zambia, and Mozambique. The capital and the largest city is Harare. A country of roughly 16 million people, Zimbabwe has 16 official languages, with English, Shona, and Ndebele the most commonly used.

Since the 11th century, present-day Zimbabwe has been the site of several organised states and kingdoms as well as a major route for migration and trade.

In the 1880s, European colonists arrived with Cecil Rhodes's British South Africa Company (BSAC). In 1888, Rhodes obtained a concession for mining rights from King Lobengula of the Ndebele peoples. He presented this concession to persuade the government of the United Kingdom to grant a royal charter to the company over Matabeleland, and its subject states such as Mashonaland as well.

Rhodes used this document in 1890 to justify sending the Pioneer Column, a group of Europeans protected by well-armed British South Africa Police (BSAP) through Matabeleland and into Shona territory to establish Fort Salisbury (now Harare) and thereby establish company rule over the area. In 1893 and 1894, with the help of their new Maxim guns, the BSAP would go on to defeat the Ndebele in the First Matabele War. Rhodes additionally sought permission to negotiate similar concessions covering all territory between the Limpopo River and Lake Tanganyika, then known as 'Zambesia'.

In accordance with the terms of aforementioned concessions and treaties, a mass settlement was encouraged, with the British maintaining control over labour as well as precious metals and other mineral resources.

In 1895, the BSAC adopted the name 'Rhodesia' for the territory, in honour of Rhodes. In 1898 'Southern Rhodesia' became the official name for the region south of the Zambezi, which later became Zimbabwe Rhodesia (1979), and finally, Zimbabwe. The region to the north was administered separately and later termed Northern Rhodesia (now Zambia).

The first recorded use of 'Zimbabwe' as a term of national reference dates from 1960 as a coinage by the nationalist Michael Mawema, whose Zimbabwe National Party became the first to officially use the name in 1961. The term 'Rhodesia' — derived from the surname of Cecil Rhodes, the primary instigator of British colonisation of the territory during the late 19th century — was perceived by African nationalists as inappropriate because of its colonial origin and connotations.

According to Mawema, black nationalists held a meeting in 1960 to choose an alternative name for the country, proposing names such as 'Matshobana' and 'Monomotapa' before his suggestion, 'Zimbabwe', prevailed. A further alternative, put forward by nationalists in Matabeleland, had been 'Matopos', referring to the Matopos Hills to the south of Bulawayo.

It was initially unclear how the chosen term was to be used — a letter written by Mawema in 1961 refers to Zimbabweland — but Zimbabwe was sufficiently established by 1962 to become the generally preferred term of the African nationalist movement. In a 2001 interview, nationalist Edson Zvobgo recalled that Mawema mentioned the name during a political rally, 'and it caught hold, and that was that'.

Shortly after Rhodes' disastrous Jameson Raid on the South African Republic, the Ndebele rebelled against white rule, led by their charismatic religious leader, Mlimo. The Second Matabele War lasted in Matabeleland until 1896, when Mlimo was assassinated. Shona agitators staged unsuccessful revolts (known as Chimurenga) against company rule during 1896 and 1897. Following these failed insurrections, the Ndebele and Shona groups were finally subdued by the Rhodes administration, which organised the land with a disproportionate bias favouring Europeans, thus displacing many indigenous peoples.

Southern Rhodesia was annexed by the United Kingdom on 12 September 1923. Shortly after annexation, on 1 October 1923, the first constitution for the new Colony of Southern Rhodesia came into force.

Under the new constitution, Southern Rhodesia became a self-governing British colony, subsequent to a 1922 referendum. Rhodesians of all races served on behalf of the United Kingdom during the two World Wars. Proportional to the white population, Southern Rhodesia contributed more per capita to both the First and Second World Wars than any other part of the Empire, including Britain itself.

In 1953, in the face of African opposition, Britain consolidated the two Rhodesias with Nyasaland (Malawi) in the ill-fated Central African Federation, which was essentially dominated by Southern Rhodesia. Growing African nationalism and general dissent, particularly in Nyasaland, persuaded Britain to dissolve the Union in 1963, forming three separate divisions. While multiracial democracy was finally introduced to Northern Rhodesia and Nyasaland, however, Southern Rhodesians of European ancestry continued to enjoy minority rule.

With Zambian independence, Ian Smith's Rhodesian Front (RF) dropped the designation 'Southern' in 1964 and issued a Unilateral Declaration of Independence (commonly abbreviated to UDI) from the United Kingdom on 11 November 1965, intent on effectively repudiating the recently adopted British policy of 'no independence before majority rule'. It was the first such course taken by a British colony since the American declaration of 1776, which Smith and others indeed claimed provided a suitable precedent to their own actions.