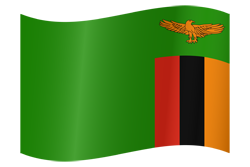 Motto: One Zambia, one nation

Member of the Commonwealth of Nations: 1964 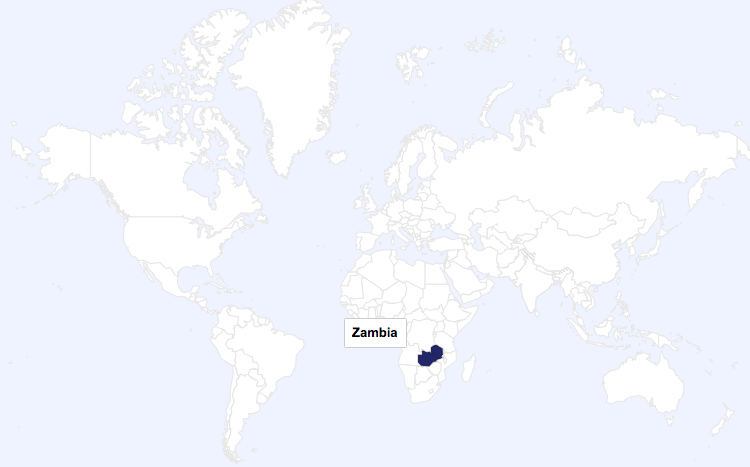 Zambia, officially the Republic of Zambia, is a landlocked country in south-central Africa (although some sources consider it part of the region of East Africa), neighbouring the Democratic Republic of the Congo to the north, Tanzania to the north-east, Malawi to the east, Mozambique to the southeast, Zimbabwe and Botswana to the south, Namibia to the southwest, and Angola to the west. The capital city is Lusaka, in the south-central part of Zambia. The population is concentrated mainly around Lusaka in the south and the Copperbelt Province to the northwest, the core economic hubs of the country.

Originally inhabited by Khoisan peoples, the region was affected by the Bantu expansion of the thirteenth century.

The earliest European to visit the area was the Portuguese explorer Francisco de Lacerda in the late 18th century. Lacerda led an expedition from Mozambique to the Kazembe region in Zambia (with the goal of exploring and crossing Southern Africa from coast to coast for the first time). Lacerda died during the expedition in 1798. From then on the expedition was led by his friend Francisco Pinto. This territory, located between Portuguese Mozambique and Portuguese Angola, was claimed and explored by Portugal in that period.

Other European visitors followed in the 19th century. The most prominent of them was David Livingstone, who had a vision of ending the slave trade through the '3 Cs': Christianity, Commerce, and Civilisation. He was the first European to see the magnificent waterfalls on the Zambezi River in 1855, naming them the Victoria Falls after Queen Victoria of the United Kingdom. He described them thus: 'Scenes so lovely must have been gazed upon by angels in their flight'. Locally the falls are known as Mosi-o-Tunya ('thundering smoke' in the Lozi or Kololo dialect). The town of Livingstone, near the Falls, is named after David Livingstone. Highly publicised accounts of his journeys motivated a wave of European visitors, missionaries, and traders after his death in 1873.

After visits by European explorers in the 18th century, the region became the British protectorates of Barotziland-North-Western Rhodesia and North-Eastern Rhodesia towards the end of the 19th century. These were merged in 1911 to form Northern Rhodesia. For most of the colonial period, Zambia was governed by an administration appointed from London with the advice of the British South Africa Company.

A two-stage election held in October and December 1962 resulted in an African majority in the legislative council and an uneasy coalition between the two African nationalist parties. The council passed resolutions calling for Northern Rhodesia's secession from the federation and demanding full internal self-government under a new constitution and a new National Assembly based on a broader, more democratic franchise.

The federation was dissolved on 31 December 1963, and in January 1964, Kenneth Kaunda won the only election for Prime Minister of Northern Rhodesia. The Colonial Governor, Sir Evelyn Hone, was very close to Kaunda and urged him to stand for the post. Soon after, there was an uprising in the north of the country known as the Lumpa Uprising led by Alice Lenshina – Kaunda's first internal conflict as leader of the nation.

On 24 October 1964 Northern Rhodesia became the Republic of Zambia – independent of the United Kingdom – with Kenneth Kaunda as the first president. Kaunda's socialist United National Independence Party (UNIP) maintained power from 1964 until 1991. From 1972 to 1991 Zambia was a one-party state with the UNIP as the sole legal political party under the motto 'One Zambia, One Nation'.

Kaunda was succeeded by Frederick Chiluba of the social-democratic Movement for Multi-Party Democracy in 1991, beginning a period of social-economic growth and government decentralisation.

Levy Mwanawasa, Chiluba's chosen successor, presided over Zambia from January 2002 until his death in August 2008. Mwanawasa is credited with campaigns to reduce corruption and increase the standard of living.

After Mwanawasa's death, Rupiah Banda presided as Acting President before being elected President in 2008. Holding office for only three years, Banda stepped down after his defeat in the 2011 elections by Patriotic Front party leader Michael Sata. Sata died on 28 October 2014, the second Zambian president to die in office. Guy Scott served briefly as interim president until new elections were held on 20 January 2015, in which Edgar Lungu was elected as the sixth president of Zambia.