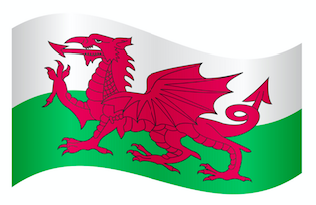 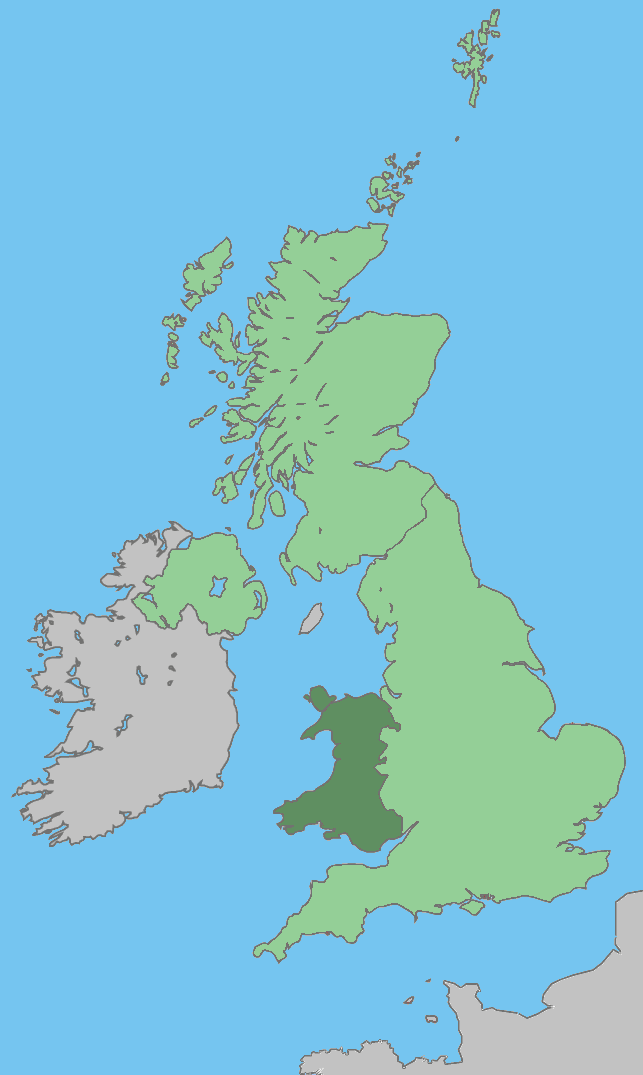 Wales (Welsh: Cymru) is a country that is part of the United Kingdom and the island of Great Britain. It is bordered by England to the east, the Irish Sea to the north and west, and the Bristol Channel to the south. Wales has over 2,700 km of coastline and is largely mountainous, with its higher peaks in the north and central areas, including Snowdon (Yr Wyddfa), its highest summit.

The English words Wales and Welsh derive from the same Germanic root (singular Walh, plural Walha), which was itself derived from the name of the Gaulish people known to the Romans as Volcae and which came to refer indiscriminately to all non-Germanic peoples. The Old English-speaking Anglo-Saxons came to use the term Wælisc when referring to the Britons in particular, and Wēalas when referring to their lands. The modern names for some Continental European lands (e.g. Wallonia, Wallachia, and Valais) and peoples (e.g. the Vlachs) have a similar etymology.

The modern Welsh name for themselves is Cymry, and Cymru is the Welsh name for Wales. These words (both of which are pronounced [ˈkəm.rɨ]) are descended from the Brythonicword combrogi, meaning 'fellow-countrymen'.

Welsh national identity emerged among the Britons after the Roman withdrawal from Britain in the 5th century, and Wales is regarded as one of the modern Celtic nations. Llywelyn ap Gruffudd's death in 1282 marked the completion of Edward I of England's conquest of Wales, though Owain Glyndwr briefly restored independence to Wales in the early 15th century. The whole of Wales was annexed by England and incorporated within the England legal system under the Laws in Wales Acts 1535 and 1542. Welsh national feeling grew over the century; Plaid Cymru was formed in 1925 and the Welsh Language Society in 1962.

The governments of the United Kingdom and of Wales define Wales as a country. The Welsh Government says: 'Wales is not a Principality. Although we are joined with England by land, and we are part of Great Britain, Wales is a country in its own right'. The title Prince of Wales is still conferred on the heir apparent to the British throne. However, the Prince of Wales has no constitutional role in modern Wales.

'Hen Wlad Fy Nhadau' is the national anthem of Wales. The title – taken from the first words of the song – means 'Old Land of My Fathers' in Welsh, usually rendered in English as simply 'Land of My Fathers'. The words were written by Evan James and the tune composed by his son, James James, both residents of Pontypridd, Glamorgan, in January 1856. When it was composed it was known as Glan Rhondda (Banks of the Rhondda). The earliest written copy survives and is part of the collections of the National Library of Wales.

'Land of My Fathers' was first performed in the vestry of the original Capel Tabor, Maesteg (which later became a working men's club, in either January or February 1856, by Elizabeth John from Pontypridd, and it soon became popular among locals. The popularity of the song increased after the Llangollen festival of 1858.

The composer James James was a harpist. He used to play his instrument in the public house which he ran, for the purpose of dancing. The song was originally intended to be performed in 6/8 time but had to be slowed down to its present tempo when it began to be sung by large crowds.

Tradition has established 'Hen Wlad Fy Nhadau' as an unofficial Welsh anthem since 1905 when it was first sung by fans at rugby games, although the official anthem at the time was 'God Bless the Prince of Wales'. The new song slowly established itself as the more popular anthem over the next four decades and was sung along with 'God Bless the Prince of Wales' and 'God Save the Queen' before sporting events until 1975 when sports officials decided that 'Hen Wlad Fy Nhadau' should be sung alone.

Usually, only the first stanza and chorus are sung in the Welsh language. 'God Save the Queen', the national anthem of the United Kingdom is sometimes played alongside 'Hen Wlad fy Nhadau' during official events with a royal connection.