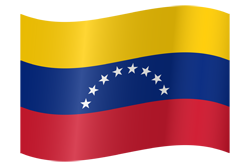 Patron saint: The Virgin Mary (Our Lady of Coromoto)

Venezuela, officially the Bolivarian Republic of Venezuela, is a federal republic on the northern coast of South America, consisting of a continental landmass and a large number of small islands and islets in the Caribbean Sea. The capital and largest urban agglomeration is the city of Caracas. The continental territory is bordered on the north by the Caribbean Sea and the Atlantic Ocean, Colombia on the west, Brazil on the south, Trinidad and Tobago to the north-east, and Guyana on the east. With Guyana, the Venezuelan government maintains a claim for Guayana Esequiba over an area of 159,542 square km.

In 1498, during his third voyage to the Americas, Christopher Columbus sailed near the Orinoco Delta and landed in the Gulf of Paria. Amazed by the great offshore current of freshwater which deflected his course eastward, Columbus expressed in a letter to Isabella and Ferdinand that he must have reached Heaven on Earth ("terrestrial paradise"). His certainty of having attained Paradise made him name this region 'Land of Grace', a phrase that has become the country's nickname.

According to the most popular and accepted belief, in 1499 an expedition led by Alonso de Ojeda visited the Venezuelan coast. The stilt houses in the area of Lake Maracaibo reminded the Italian navigator, Amerigo Vespucci, of the city of Venice in Italy, so he named the region Veneziola ("Little Venice"). Venezuela became the Spanish version of Veneziola. However, Martín Fernández de Enciso who was a member of the Vespucci and Ojeda crew gave a different account. In his work Summa de geografía, he states that the crew found indigenous people who called themselves the Veneciuela. The name Venezuela may have evolved from the native word.

Spain's colonisation of mainland Venezuela started in 1522, establishing its first permanent South American settlement in the present-day city of Cumaná. In the 16th century, Venezuela was contracted as a concession by the King of Spain to the German Welser banking family (Klein-Venedig, 1528-1546). Native caciques (leaders) such as Guaicaipuro (circa 1530-1568) and Tamanaco (died 1573) attempted to resist Spanish incursions, but the newcomers ultimately subdued them. Tamanaco was put to death by order of Caracas' founder, Diego de Losada.

In the 16th century, during the Spanish colonisation, indigenous peoples such as many of the Mariches, themselves descendants of the Kalina, converted to  Roman Catholicism. Some of the resisting tribes or leaders are commemorated in place names, including Caracas, Chacao and Los Teques. The early colonial settlements focused on the northern coast but in the mid-18th century, the Spanish pushed farther inland along the Orinoco River. Here, the Ye'kuana (then known as the Makiritare) organised serious resistance in 1775 and 1776.

Spain's eastern Venezuelan settlements were incorporated into New Andalusia Province. Administered by the Royal Audiencia of Santo Domingo from the early 16th century, most of Venezuela became part of the Viceroyalty of New Granada in the early 18th century and was then reorganised as an autonomous Captaincy General starting in 1777. The town of Caracas, founded in the central coastal region in 1567, was well-placed to become a key location, being near the coastal port of La Guaira whilst itself being located in a valley in a mountain range, providing defensive strength against pirates and a more fertile and healthy climate.

After a series of unsuccessful uprisings, Venezuela, under the leadership of Francisco de Miranda, a Venezuelan marshal who had fought in the American Revolution and the French Revolution, declared independence on 5th July 1811. This began the Venezuelan War of Independence. A devastating earthquake that struck Caracas in 1812, together with the rebellion of the Venezuelan llaneros, helped bring down the first Venezuelan republic. A second Venezuelan republic proclaimed on 7th August 1813, lasted several months before being crushed.

Sucre, who won many battles for Bolívar, went on to liberate Ecuador and later become the second president of Bolivia. Venezuela remained part of Gran Colombia until 1830 when a rebellion led by Páez allowed the proclamation of a newly independent Venezuela, and Páez became the republic's first president.

Oil was discovered in the early 20th century, and today, Venezuela has the world's largest known oil reserves and has been one of the world's leading exporters of oil. Previously, the country was an underdeveloped exporter of agricultural commodities such as coffee and cocoa but oil quickly came to dominate exports and government revenues.

The colours of the Venezuelan flag are yellow, blue, and red: the yellow stands for land wealth, the blue for the sea that separates Venezuela from Spain, and the red for the blood shed by the heroes of independence.

"Gloria al Bravo Pueblo" ("Glory to the Brave People") was adopted as Venezuela's national anthem by President Antonio Guzmán Blanco on 25th May 1881. The lyrics were written by the physician and journalist Vicente Salias in 1810. The music was later composed by musician Juan José Landaeta.

On 29 August 2008, Venezuelan President Hugo Chavez announced that he backed Russia’s decision to recognise the independence of two regions of Georgia – Abkhazia and South Ossetia.

On 10 September 2009, during his visit to Moscow, Venezuela’s leader told then-Russian President Dmitry Medvedev about recognising the independence of both regions (under the Venezuelan constitution, foreign policy is the prerogative of the head of state and does not require approval of the parliament).