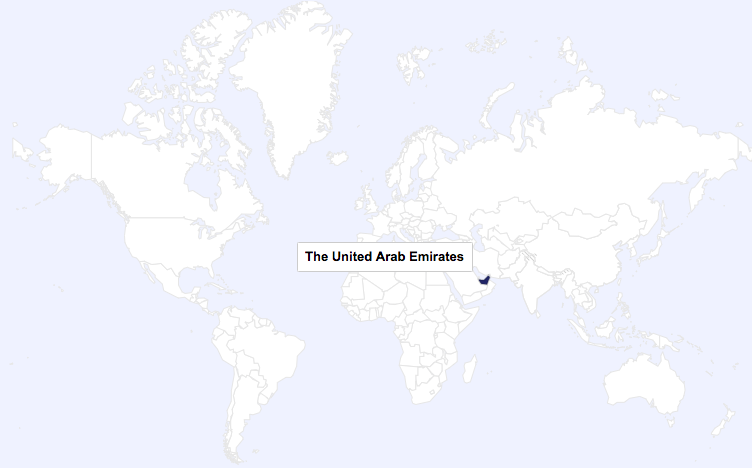 The United Arab Emirates (UAE), sometimes simply called the Emirates, is a federal sovereign absolute monarchy in Western Asia at the southeast end of the Arabian Peninsula on the Persian Gulf, bordering Oman to the east and Saudi Arabia to the south, as well as sharing maritime borders with Qatar to the west and Iran to the north.

The country is a federation of seven emirates consisting of Abu Dhabi (which serves as the capital), Ajman, Dubai, Fujairah, Ras al-Khaimah, Sharjah, and Umm al-Quwain. Each emirate is governed by a ruler who jointly forms the Federal Supreme Council. One of the rulers serves as the President of the UAE.

In 2013 the Emirate's population was 9.2 million, of which 1.4 million were Emirati citizens and 7.8 million were expatriates. Its most populous city of Dubai is an international aviation and maritime trade hub.

Islam is the official religion and Arabic is the official language of the Emirates. The Emirates has a modest dress code, which is part of Dubai's criminal law. Most malls in the UAE have a dress code displayed at entrances.; females are encouraged to cover their shoulders and knees at the Dubai malls. People are also requested to wear modest clothing in mosques. Therefore, mosques open to tourists provide modest clothing for men and women if needed. However, people can wear swimwear at the pools and beaches throughout the Emirates.

By the 16th century ports in the Persian (Arabic) Gulf and part of the population that today form coastal Iraq, Kuwait, and Saudi Arabia came under the direct influence of the Ottoman Empire. At the same time, the English colonial forces also appeared in the Persian Gulf region.

The southern coast of the Persian Gulf was known to the British as the 'Pirate Coast', as boats of the Al Qawasim (Al Qasimi) federation based in the area harassed British-flagged shipping from the 17th century into the 19th.

British expeditions to protect the Indian trade from raiders at Ras al-Khaimah led to campaigns against that headquarters and other harbours along the coast in 1809 and subsequently 1819. The following year Britain and a number of local rulers signed a treaty to combat piracy along the Persian Gulf coast, giving rise to the term the Trucial States, which came to define the status of the coastal emirates.

A further treaty was signed in 1843 and in 1853 the Perpetual Treaty of Maritime Truce was agreed. To this was added the 'Exclusive Agreements', signed in 1892, which made the Trucial States a British protectorate.

Under the 1892 treaty, the trucial sheikhs agreed not to dispose of any territory except to the British and not to enter into relationships with any foreign government other than the British without their consent. In return, the British promised to protect the Trucial Coast from all aggression by sea and to help in case of land attack. The Exclusive Agreement was signed by the Rulers of Abu Dhabi, Dubai, Sharjah, Ajman, Ras Al Khaimah, and Umm Al Quwain between 6 and 8 March 1892. It was subsequently ratified by the Viceroy of India and the British Government in London. British maritime policing meant that pearling fleets could operate in relative security. However, some sheikhs and merchants had lost an important source of income because of the British prohibition of the slave trade.

During the 19th and early 20th centuries, the pearling industry thrived, providing both income and employment to the people of the Persian Gulf. However, the economic depression of the late 1920s and early 1930s, coupled with the invention of the cultured pearl, wiped out the trade. The British set up a development office that helped in some small developments in the emirates.

The seven sheikhs of the emirates decided to form a council to coordinate matters between them and took over the development office. In 1952 they formed the Trucial States Council and appointed Adi Bitar, Dubai's Sheikh Rashid's legal advisor, as Secretary General and Legal Advisor to the Council. The council was terminated once the United Arab Emirates was formed. The tribal nature of society and the lack of definition of borders between emirates frequently led to disputes, settled either through mediation or, more rarely, force. The Trucial Oman Scouts was a small military force used by the British to keep the peace.

In 1955 the United Kingdom sided with Abu Dhabi in the latter's dispute with Oman over the Buraimi Oasis. A 1974 agreement between Abu Dhabi and Saudi Arabia would have settled the Abu Dhabi-Saudi border dispute but this has not been ratified until 2008 when the Emirate's border with Oman was finally ratified.

In 1922 the British government secured undertakings from the trucial rulers not to sign concessions with foreign companies. Aware of the potential for the development of natural resources such as oil, following finds in Persia (from 1908) and Mesopotamia (from 1927), a British-led oil company, the Iraq Petroleum Company (IPC), showed an interest in the region. The Anglo-Persian Oil Company (APOC, later to become British Petroleum) had a 23.75% share in IPC.

From 1935 onshore concessions to explore for oil were agreed with local rulers, with APOC signing the first one on behalf of Petroleum Concessions Ltd (PCL), an associate company of IPC. APOC was prevented from developing the region alone because of the restrictions of the Red Line Agreement, which required it to operate through IPC. A number of options between PCL and the trucial rulers were signed, providing useful revenue for communities experiencing poverty following the collapse of the pearl trade. However, the wealth of oil, which the rulers could see from the revenues accruing to surrounding countries such as Iran, Bahrain, Kuwait, Qatar, and Saudi Arabia, remained elusive. The first bore holes in Abu Dhabi were drilled by IPC's operating company, Petroleum Development (Trucial Coast) Ltd (PDTC) at Ras Sadr in 1950.

When Dubai's oil exports commenced in 1969, Sheikh Rashid bin Saeed Al Maktoum, the ruler of Dubai, was able to invest the revenues from the limited reserves found to spark the diversification drive that would create the modern global city of Dubai.

By 1966 it had become clear the British government could no longer afford to administer and protect what is now the United Arab Emirates. British MPs debated the readiness of the Royal Navy to defend the sheikhdoms. Secretary of State for Defence, Denis Healey reported that the British Armed Forces were seriously overstretched and in some respects dangerously under-equipped to defend the sheikhdoms. On 24 January 1968 British Prime Minister Harold Wilson announced the government's decision, reaffirmed in March 1971 by Prime Minister Edward Heath, to end the treaty relationships with the seven Trucial Sheikhdoms, that had been, together with Bahrain and Qatar, under British protection.

Days after the announcement, the ruler of Abu Dhabi, Sheikh Zayed bin Sultan Al Nahyan, fearing vulnerability, tried to persuade the British to honour the protection treaties by offering to pay the full costs of keeping the British Armed Forces in the Emirates. The British Labour government rejected the offer. After Labour MP Goronwy Roberts informed Sheikh Zayed of the news of British withdrawal, the nine Persian Gulf sheikhdoms attempted to form a union of Arab Emirates but by mid-1971 they were still unable to agree on terms of the union even though the British treaty relationship was to expire in December of that year.

Fears of vulnerability were realised the day before independence. An Iranian destroyer group broke formation from an exercise in the lower Gulf, sailing to the Tunb islands. The islands were taken by force, civilians and Arab defenders alike allowed to flee. A British warship stood idle during the course of the invasion. A destroyer group approached the island Abu Musa as well. But Sheikh Khalid bin Mohammed Al Qasimi had already negotiated with the Iranian Shah, and the island was quickly leased to Iran for $3 million a year. Meanwhile, Saudi Arabia laid claim to swathes of Abu Dhabi.

Originally intended to be part of the proposed Federation of Arab Emirates, Bahrain became independent in August, and Qatar in September 1971. When the British-Trucial Sheikhdoms treaty expired on 1 December 1971, they became fully independent.

On 2 December 1971, at the Dubai Guesthouse, now known as Union House, six of the emirates agreed to enter into a union called the United Arab Emirates. Ras al-Khaimah joined later, on 10 January 1972.

In February 1972 the Federal National Council (FNC) was created, which was a 40-member consultative body appointed by the seven rulers. The UAE joined the Arab League on 6 December 1971 and the United Nations on 9 December. It was a founding member of the Gulf Cooperation Council in May 1981, with Abu Dhabi hosting the first GCC summit.

UAE forces joined the allies against Iraq after the invasion of Kuwait in 1990.

The Emirate's oil reserves are the seventh-largest in the world while its natural gas reserves are the world's seventeenth-largest. Sheikh Zayed, the ruler of Abu Dhabi and the first President of the United Arab Emirates, oversaw the development of the Emirates and steered oil revenues into healthcare, education, and infrastructure. The Emirate's rising international profile has led to it being recognised as a regional power.

The National Anthem of the United Arab Emirates, also popularly known as Ishy Bilady (literally, Long Live my Nation), was officially accepted as the United Arab Emirates' national anthem after the formation of the country in 1971. The anthem was composed by Mohammed Abdel Wahab. The lyrics, officially adopted in 1986, were written by Arif Al Sheikh Abdullah Al Hassan.