Government: Dependency under a constitutional monarchy 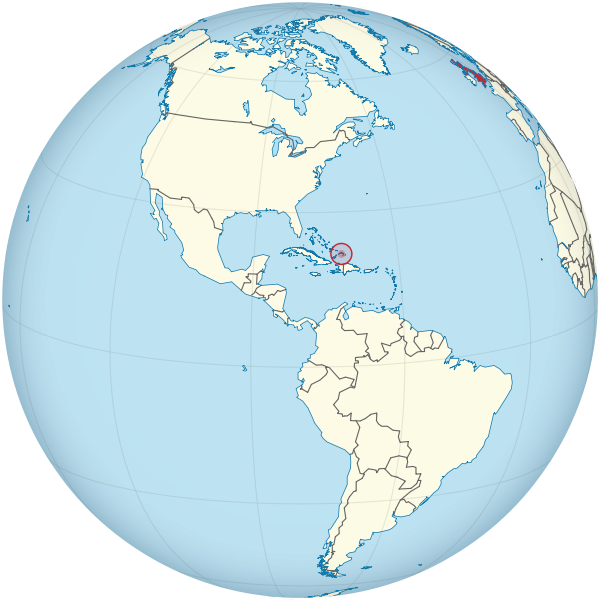 The Turks and Caicos Islands lie southeast of Mayaguana in the Bahamas island chain, and north of the island of Hispaniola (Haiti and the Dominican Republic) and the other Antilles archipelago islands.

Cockburn Town is the administrative and political capital of the Turks and Caicos Islands. It is located on the largest island in the Turks Islands archipelago, Grand Turk Island, about 1,042 km east-southeast of Miami (United States). The seat of government since 1766, Cockburn Town was the first permanent settlement on any of the islands, founded in 1681 by salt collectors. The town is known for its long, narrow streets and old street lamps. There are 18th and 19th-century Bermudian historic buildings on Duke and Front Streets. Her Majesty's Prison on Pond Street was built in the 1830s and was used until 1994. It hosts a bell tower and its own museum.

Public Education is supported by taxation and is mandatory for children aged five to sixteen. Primary education lasts for six years and secondary education lasts for five years. The Turks and Caicos Islands Community College offers free higher education to students who have successfully completed their secondary education. Once a student completes their education at the Community College, they are supported to further their education at a university in the United States, Canada, or the United Kingdom for free. They have to commit to working in the Turks and Caicos Islands for four years to receive this additional education.

There is no postal delivery in the Turks and Caicos; mail is picked up at one of four post offices on each of the major islands. Mobile phone service is provided by Cable & Wireless Communications, a British company headquartered in London, United Kingdom with operations in Pan-America.

As the Turks and Caicos Islands are a British Overseas Territory, the territory's legal system is based on English common law, with a small number of laws adopted from Jamaica and the Bahamas. Suffrage is universal for those over 18 years of age. English is the official language. the population also speaks Turks and Caicos Islands Creole, which is similar to Bahamian Creole.

Cricket is the islands' national sport. There are two domestic leagues, one on Grand Turk with three teams and another on Providenciales. Because the territory is not recognised by the International Olympic Committee, Turks and Caicos Islanders compete for Great Britain at the Olympic Games. In 2012 Turks and Caicos Islands' football team shared the position of the lowest ranking national men's football team in the world at the rank of 207th.

The first inhabitants of the islands were Taíno people who crossed over from Hispaniola sometime from 500 to 800 AD. Together with Taíno who migrated from Cuba to the southern Bahamas around the same time, these people developed as the Lucayan. Around 1200, the Turks and Caicos Islands were resettled by Classical Taínos from Hispaniola.

The first European documented to sight the islands was Spanish conquistador Juan Ponce de León in 1512. Soon after the Spanish arrived on the islands, they began enslaving the Taíno and the Lucayan to replace the largely depleted native population of Hispaniola. The southern Bahama Islands and the Turks and Caicos Islands were completely depopulated by about 1513 and remained so until the 17th century.

During the 16th, 17th, and 18th centuries, the islands passed from Spanish to French and to British control but none of the three powers ever established any settlements. Bermudian salt collectors settled the Turks Islands around 1680. For several decades around the turn of the 18th century, the islands became popular pirate hideouts. From 1765-1783 the islands were under French occupation.

After the American War of Independence in 1775-1783, many Loyalists fled to British Caribbean colonies. In 1783 they were the first settlers on the Caicos Islands. They developed cotton as an important cash crop but it was superseded by the development of the salt industry.

In 1799 the Turks and the Caicos islands were annexed by Britain as part of the Bahamas. The processing of sea salt was developed as a highly important export product from the West Indies, with the labour done by African slaves. Salt continued to be a major export product into the nineteenth century, too.

In 1807 Britain prohibited the slave trade, and in 1833 abolished slavery in its colonies. British ships sometimes intercepted slave traders in the Caribbean. In 1837 the Esperanza, a Portuguese slave ship, was wrecked off East Caicos. The crew and 220 captive Africans survived the shipwreck. Africans from this ship may have been among the 189 liberated Africans whom the British colonists settled in the Turks and Caicos from 1833 to 1840.

In 1841 the Trouvadore, an illegal Spanish slaver, was wrecked off the coast of East Caicos. All the 20-man crew and 192 captive Africans survived the sinking. Officials freed the Africans. They increased the small population of the colony by seven percent. Numerous descendants have come from those free Africans. The Spanish crew was taken to Nassau, to be turned over to the custody of the Cuban consul and taken to Cuba for prosecution.

An 1878 letter documents the 'Trouvadore Africans' and their descendants as constituting an essential part of the 'labouring population' on the islands. In 2004 marine archaeologists affiliated with the Turks and Caicos National Museum, discovered a wreck called the Black Rock Ship. In November 2008 a cooperative marine archaeology expedition confirmed that the wreck had artifacts whose style and date of manufacture linked them to the Trouvadore.

In 1848 Britain designated the Turks and Caicos as a separate colony under a council president. In 1873 the islands were made part of the Jamaica colony. In 1894 the chief colonial official was restyled commissioner.

In 1917 Canadian Prime Minister Robert Borden suggested that the Turks and Caicos join Canada but this idea was rejected by British Prime Minister David Lloyd George. Thus, the islands remained a dependency of Jamaica.

On 4 July 1959, the islands were again designated as a separate colony, the last commissioner being the restyled administrator. The governor of Jamaica also continued as the governor of the islands.

When Jamaica was granted independence from Britain in August 1962, the Turks and Caicos Islands became a Crown colony.

In 1974 Canadian New Democratic Party MP Max Saltsman tried to use his Private Member's Bill for legislation to annex the islands to Canada but it did not pass in the House of Commons of Canada.

Since August 1976 the islands have had their own government headed by a chief minister (now premier).

The islands' political troubles in the early 21st century resulted in a rewritten constitution promulgated in 2006. In 2009 Premier Michael Misick resigned in the face of corruption charges, and the United Kingdom took over direct control of the government. In October 2012 a new constitution was adopted and the government was returned to local administration after the November 2012 elections. In the 2016 elections, Rufus Ewing's Progressive National Party (PNP) lost for the first time since they replaced Derek Hugh Taylor's government in 2003. The People's Democratic Movement (PDM) came to power with Sharlene Cartwright-Robinson as Premier.

In the early days of the American space program, NASA used a missile tracking station on Grand Turk. After his three earth orbits in 1962, American astronaut John Glenn successfully landed in the nearby ocean and was brought back ashore to Grand Turk island.

In the 1960s American investors arrived on the islands and funded the construction of an airstrip on Provo Island, building the archipelago's first hotel The Third Turtle. A small trickle of tourists began to arrive, supplementing the salt economy. Club Med, a private French company specialising in premium all-inclusive holidays, set up a resort at Grace Bay soon after. In the 1980s Club Med funded an upgrading of the airstrip to allow for larger aircraft, and since then tourism has been gradually on the increase. Most capital goods and food for domestic consumption are imported. Two major sources of tourists are the United States and Canada. Several Hollywood stars have built homes in the Turks and Caicos, including Bruce Willis. It is common for foreign couples to be married in the Turks and Caicos Islands. Ben Affleck and Jennifer Garner got married on Parrot Cay in 2005.

Apart from tourism, nowadays the Turks and Caicos Islands are known as an offshore financial centre.

'This Land of Ours' is the territorial national song of the Turks and Caicos Islands. Music and lyrics belong to Dr. Rev. Conrad Howell (1962-2015). As a British Overseas Territory, the official national anthem for the islands is still 'God Save the Queen'.