Capital: Edinburgh of the Seven Seas

Motto: Our faith is our strength

Internet TLD: .sh or .uk can be used 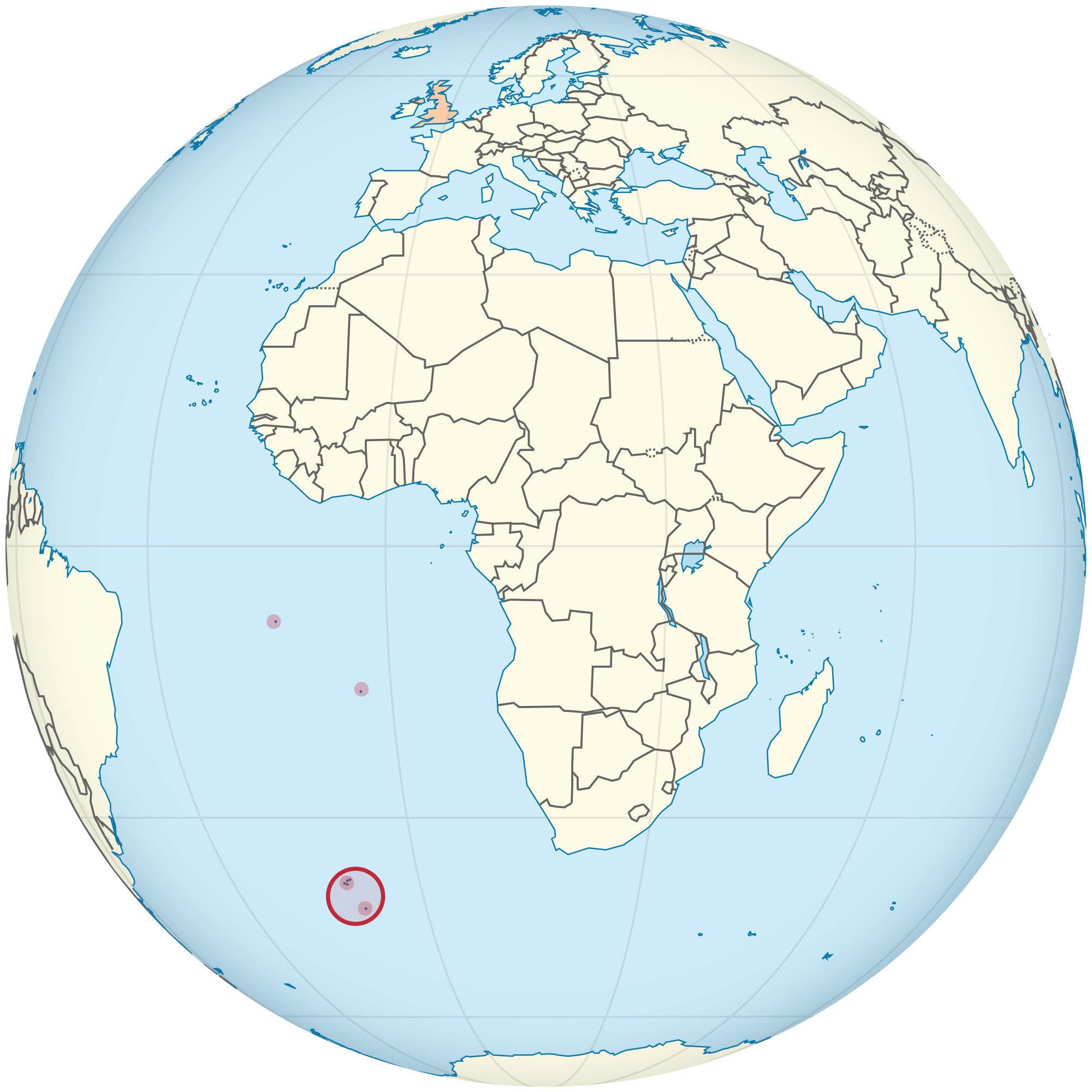 Tristan da Cunha, colloquially Tristan, is both a remote group of volcanic islands in the south Atlantic Ocean and the main island of that group. It is the most remote inhabited archipelago in the world, 2,400 km from the nearest inhabited land, Saint Helena, and 2,400 km from the nearest continental land, South Africa. It is 3,360 km from South America. The territory consists of the main island, Tristan da Cunha, which has an area of 98 square km, and the smaller, uninhabited Nightingale Islands and the wildlife reserves of Inaccessible and Gough islands.

The island’s population is just 275, and no new residents are allowed to settle on the island – hence the population number does not increase, or decrease much. The only religion is Christianity, mainly Anglicanism and Roman Catholicism. Due to the small population, marriages between relatives (e.g. second cousins) has inevitably occurred, resulting in some minor health issues such as asthma, glaucoma, etc. The islanders are comprised of 80 families, with just 7 surnames: Glass, Green, Hagan, Lavarello, Repetto, Rogers, and Swain. The other islands are uninhabited, except for the personnel of a weather station on Gough Island.

Health care on the island is free, however Tristan da Cunha has just one resident doctor and five nurses, meaning that any serious injuries are treated in Cape Town (South Africa).

Although Tristan da Cunha is part of the same overseas territory as Saint Helena, it does not use the local Saint Helena pound. Instead, the island's official currency is the British pound sterling. The Bank of Saint Helena was established on Saint Helena and Ascension Island in 2004. Although the island is a British dependency, it is not allowed direct trade access to the European Union.

From 1998 to 2006, the Internet was available in Tristan da Cunha but its high cost made it almost unaffordable for the local population who primarily used it only to send emails. Also, the connection was extremely unreliable, connecting through a 64 kbit/s satellite phone connection provided by Inmarsat. From 2006 a very-small-aperture terminal provides 3072 kbit/s of publicly accessible bandwidth via an internet cafe.

In 2005 the islands were given a United Kingdom post code (TDCU 1ZZ), to make it easier for the residents to order goods online.

There is no mobile phone coverage on the islands.

The islands were first recorded as sighted in 1506 by Portuguese explorer Tristão da Cunha, although rough seas prevented a landing. He named the main island after himself, Ilha de Tristão da Cunha. It was later anglicised as Tristan da Cunha Island. Some sources state that the Portuguese made the first landing in 1520 when the Lás Rafael captained by Ruy Vaz Pereira called at Tristan for water.

The first permanent settler was Jonathan Lambert, from Salem (Massachusetts) who arrived at the islands in December 1810 with two other men; later one more newcomer joined the first settlers. Lambert publicly declared the islands his property and named them the Islands of Refreshment. Three of the four men died in 1812; however, the survivor among the original three permanent settlers, Thomas Currie remained as a farmer on the island.

In 1816 the United Kingdom annexed the islands, ruling them from the Cape Colony in South Africa. This is reported to have primarily been a measure to ensure that the French would be unable to use the islands as a base for a rescue operation to free Napoleon Bonaparte from his prison on Saint Helena. The occupation also prevented the United States from using Tristan da Cunha as a cruiser base, as it had during the War of 1812.

The islands were occupied by a garrison of British Marines and a civilian population gradually grew. Whalers set up bases on the islands for operations in the Southern Atlantic. However, the opening of the Suez Canal in 1869, together with the gradual transition from sailing ships to coal-fired steam ships, increased the isolation of the islands. They were no longer needed as a stopping port for lengthy sail voyages, or for shelter for journeys from Europe to East Asia.

In 1867, Prince Alfred, Duke of Edinburgh and second son of Queen Victoria, visited the islands. The main settlement, Edinburgh of the Seven Seas, was named in honour of his visit.

On 15 October 1873, the Royal Navy scientific survey vessel HMS Challenger docked at Tristan to conduct geographic and zoological surveys on Tristan, Inaccessible Island and the Nightingale Islands. In his log, Captain George Nares recorded a total of 15 families and 86 individuals living on the island.

After an incredibly difficult winter in 1906, and years of hardship since the 1880s, the British government offered to evacuate the island. The Tristanians held a meeting and decided to refuse. It was reported that no ships visited from 1909 until 1919, when HMS Yarmouth finally stopped to inform the islanders of the outcome of World War I.

In 1936 The Daily Telegraph of London reported the population of the island was 167 people, with 185 cattle and 42 horses.

During the World War II, Britain used the islands as a secret Royal Navy weather and radio station codenamed HMS Atlantic Isle, to monitor Nazi U-boards (which were required to maintain radio contact) and shipping movements in the South Atlantic Ocean.

In 1957 Prince Philip, Duke of Edinburgh, the Queen Elizabeth II's consort, visited the islands as part of a world tour on board the royal yacht HMY Britannia.

On 10 October 1961 the eruption of Queen Mary's Peak forced the evacuation of the entire population of 264 individuals. Evacuees took to the water in open boats and sailed to uninhabited Nightingale Island, where they were picked up by a passenger ship that took them via Cape Town to Britain. The islanders arrived in the UK to a big press reception, and were settled in an old Royal Air Force camp near Calshot (Hampshire). Now the harbour at Edinburgh of the Seven Seas is called Calshot Harbour, named after the place in Hampshire where the islanders temporarily stayed during the volcanic eruption. In 1962 a Royal Society expedition went to the islands to assess the damage, and reported that the settlement of Edinburgh of the Seven Seas had been only marginally affected. The 1961 volcanic eruption destroyed the Tristan da Cunha canned crawfish factory, which was rebuilt a short time later. Most families returned home in 1963.

On 23 May 2001 the islands were hit by an extratropical cyclone that generated winds up to 190 km/h. A number of structures were severely damaged, and numerous cattle were killed, prompting emergency aid provided by the British government.

The island's unique social and economic organisation has evolved over the years but it still depends on the principles set out by William Glass in 1817, when he established a settlement based on equality. All Tristan families are farmers, possessing their own stock and/or fishing. All land is communally owned. All households have pieces of land where they grow potatoes. Livestock numbers are strictly controlled to conserve pasture and to prevent better-off families from accumulating wealth. Unless the community votes for a change in its law, no outsiders are allowed to buy land or settle on Tristan. All people, including children and pensioners, are involved in farming while adults have salaried jobs working either for the government, or in domestic service. Many of the men are involved in the fishing industry, going to sea in good weather. The nominal fishing season lasts 90 days, or much less.

On 13 February 2008 fire destroyed the fishing factory and the four power generators that supplied the island. On 14 March new generators were installed and uninterrupted power was restored. As fishing is a mainstay of the economy on the island, the 2008 fire was crucial for the locals. While a new factory was being planned and built, M/V Kelso sailed to the island and acted as a factory ship, with island fishermen based on board for stints normally of one week. The new facility was ready in July 2009, for the start of the 2009-2010 fishing season.

On 16 March 2011 the freighter MS Oliva crashed to Nightingale Island, spilling tons of heavy fuel oil into the ocean. The oil slick threatened the island's population of rockhopper penguins. Nightingale Island has no fresh water, so the penguins were transported to Tristan da Cunha for cleaning.

A total solar eclipse is awaited to pass over the island on 5 December 2048. The island is calculated to be on the centre line of the umbra's path for nearly three and a half minutes of totality.