Motto: In My Defens God Me Defend (In my defence God me defend) 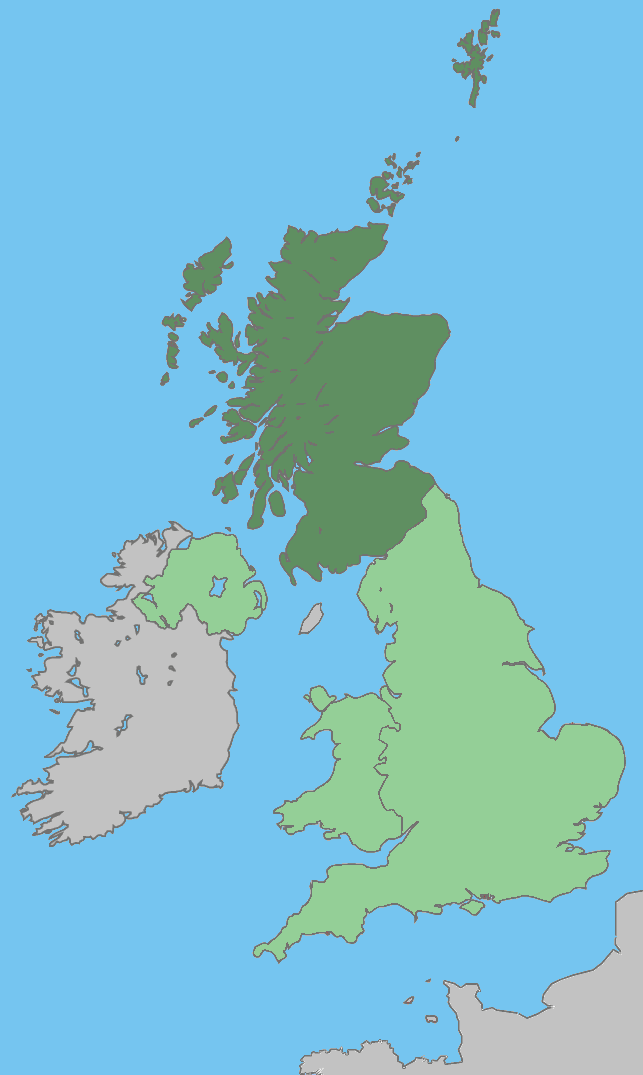 Scotland (Scottish Gaelic: Alba) is a country that is part of the United Kingdom and covers the northern third of the island of Great Britain. It shares a border with England to the south and is otherwise surrounded by the Atlantic Ocean, with the North Sea to the east and the North Channel and the Irish Sea to the south-west. In addition to the mainland, the country is made up of more than 790 islands.

The legal system within Scotland has remained separate from those of England and Wales and Northern Ireland. Scotland constitutes a distinct jurisdiction in both public and private law. The continued existence of legal, educational, religious and other institutions distinct from those in the remainder of the UK have all contributed to the continuation of Scottish culture and national identity since the 1707 union with England.

Scotland is divided into 32 subdivision (known as local authorities, or 'councils'). Glasgow City is the largest subdivision in Scotland in terms of population, with Highland being the largest in terms of area. Limited self-governing power is devolved from the Scottish Government, such as education, social services and roads and transportation, to each subdivision, with decision making being decided by councillors who are elected at local elections every five years. The head of each subdivision is usually the Lord Provost alongside the Leader of the Council with a Chief Executive being appointed as director of the council area.

'Scots Wha Hae' (English: Scots, Who Have) is a patriotic song of Scotland using both Scottish and English words. For centuries this song served as an unofficial national anthem of the country but lately, it has been supplanted by 'Scotland the Brave' and 'Flower of Scotland'.

The lyrics of 'Scots Wha Hae' were written by Robert Burns in 1793 in the form of a speech given by Robert the Bruce before the Battle of Bannockburn in 1314, where Scotland maintained its sovereignty from the Kingdom of England. Robert Burns wrote the lyrics to the traditional Scottish tune 'Hey Tuttie Tatie', which, according to tradition, was played by Bruce's army at the Battle of Bannockburn, and by the Franco-Scots army at the Siege of Orleans.

'Scotland the Brave' (Scottish Gaelic: Alba an Àigh) is a Scottish patriotic song. It was one of several songs considered an unofficial national anthem of Scotland (others being 'Flower of Scotland' and 'Scots Wha Hae').

'Flower of Scotland' (Scots: Flouer o Scotland, Scottish Gaelic: Flùr na h-Alba) is a Scottish song, frequently used at special occasions and sporting events. Although there is no official national anthem of Scotland, 'Flower of Scotland' is one of the songs that fulfil the role along with other two. Roy Williamson of the folk group the Corries wrote both the lyrics and music for the song. The words refer to the victory of the Scots, led by Robert the Bruce, over England's Edward II at the Battle of Bannockburn in 1314. The song was composed and is sung in English, typically with Scots pronunciation of a few words (e.g. 'Tae' as opposed to 'To').

The song has been used as a National Anthem by the Scotland national rugby union team, ever since the winger, Billy Steele, encouraged his team-mates to sing it on the victorious Lions tour of South Africa in 1974. The song was adopted as the pre-game anthem during the deciding match of the 1990 Five Nations Championship between Scotland and England, which Scotland won 13-7 to win the Grand Slam.

The Scottish Football Association adopted 'Flower of Scotland' as its pre-game national anthem in 1997 although it was first used by them in 1993. Usually, only the first and third verses are sung. At any home International Scotland Rugby union test match the first verse is accompanied by bagpipes followed by the third verse unaccompanied by any instrument.

When sung at sporting events, crowds will often call back after certain lines – after the words 'and stood against him', 'England' or 'Gainst who?' may be heard.