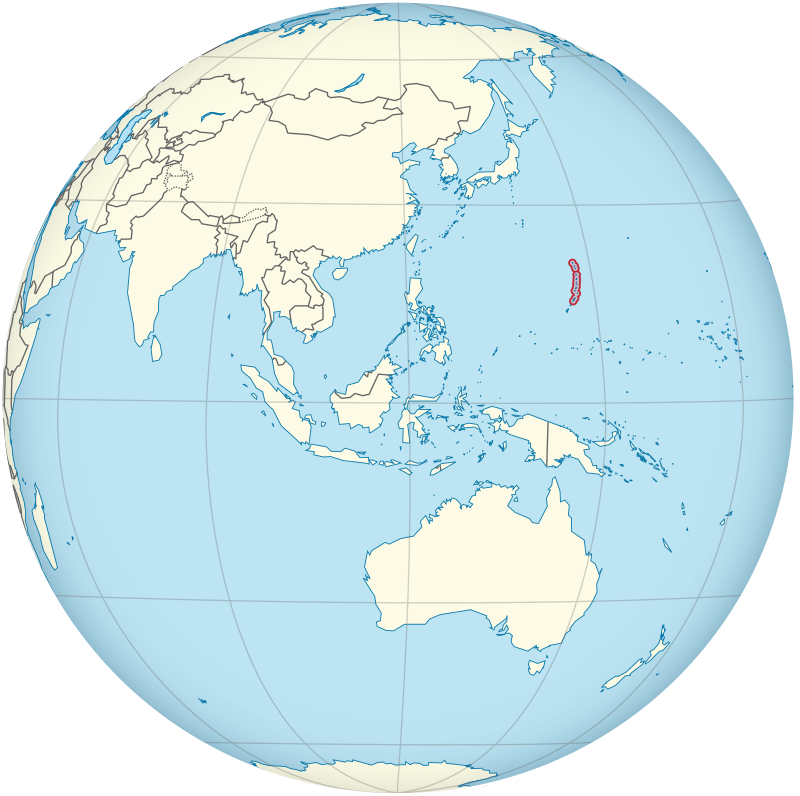 The first people of the Mariana Islands immigrated between 4000 BC and 2000 BC from Southeast Asia. After the first contact with Spaniards, they eventually became known as the Chamorros. The ancient people of the Marianas raised colonnades of megalithic capped pillars called latte stones upon which they built their homes. The Spanish reported that by the time of their arrival, the largest of these were already in ruins and that the Chamorros believed the ancestors who had erected the pillars lived in an era when people possessed supernatural abilities. Archeologists in 2013 posited that the first people to settle in the Marianas may have made what was at that point the longest uninterrupted ocean-crossing voyage in human history.

The first European explorer of the area, the Portuguese navigator Ferdinand Magellan, arrived in 1521. He landed on Guam, the southernmost island of the Marianas, and claimed the archipelago for Spain. The Spanish ships were met offshore by the native Chamorros who delivered refreshments and then helped themselves to a small boat belonging to Magellan's fleet. This led to a cultural misunderstanding: in Chamorro tradition, little property was private and taking something one needed, such as a boat for fishing, did not count as stealing. The Spanish did not understand this custom and fought the Chamorros until the boat was recovered. Three days after he had been welcomed on his arrival, Magellan fled the archipelago. Spain regarded the islands as annexed and in 1565 it made them part of the Spanish East Indies. Most of the islands' native population (over 90%) died from Spanish diseases or married non-Chamorro settlers under Spanish rule. New settlers, primarily from the Philippines and the Caroline Islands, were brought by Spanish colonists to repopulate the islands.

Following its loss during the Spanish-American War of 1898, Spain ceded Guam to the United States and sold the rest – the Northern Marianas, along with the Caroline Islands, to Germany under the German-Spanish Treaty of 1899.

Early in World War I, Japan declared war on Germany and invaded the Northern Marianas. During the Japanese period, sugar cane became the main industry of the islands.

On 8th December 1941, hours after the attack on Pearl Harbor, Japanese forces from the Marianas launched an invasion of Guam.

On 15th June 1944, near the end of World War II, the United States military invaded the Mariana Islands, starting the Battle of Saipan, which ended on 9 July. Of the 30,000 Japanese troops defending Saipan, fewer than 1,000 remained alive at the end of the battle. However, the war did not end for everyone with the signing of the armistice. The last group of Japanese holdouts surrendered on Saipan on 1 December 1945. On Guam Japanese soldier Shoichi Yokoi, unaware that the war had ended, hid in a jungle cave until 1972.

After Japan's defeat in World War II, the Northern Marianas were administered by the United States. In the 1970s the people of the Northern Mariana Islands decided not to seek independence but instead to forge closer links with the United States. Negotiations for commonwealth status began in 1972 and a covenant to establish a commonwealth in political union with the United States was approved in a 1975 referendum. A new government and constitution came into effect in 1978, after being approved in a 1977 referendum.

'Gi Talo Gi Halom Tasi' ('In the Middle of the Sea') is the territorial anthem of the Northern Mariana Islands. Since the islands are a United States dependency, the national anthem is still 'The Star-Spangled Banner'.