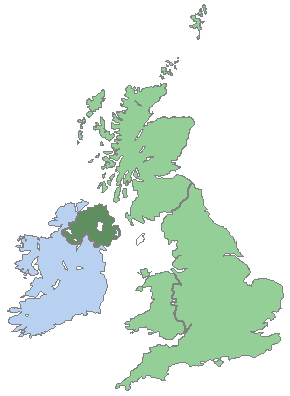 Northern Ireland (Irish: Tuaisceart Éireann; Ulster-Scots: Norlin Airlann) is a part of the United Kingdom in the north-east of the island of Ireland, variously described as a country, province, or region. Northern Ireland shares a border to the south and west with the Republic of Ireland.

Northern Ireland shares both the culture of Ireland and the culture of the UK. Those of Catholic background tend to identify more with Irish culture, and those of Protestant background more with British culture. Since the end of the Troubles, Northern Ireland has witnessed rising numbers of tourists. Attractions include cultural festivals, musical and artistic traditions, countryside and geographical sites of interest, public houses, welcoming hospitality and sports (especially golf and fishing). Since 1987 pubs have been allowed to open on Sundays, despite some opposition.

In Northern Ireland, 'God Save the Queen' is used as the official anthem.