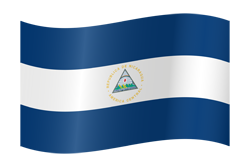 Independence: 15 September 1821 (from Spain, Mexico, and the Federal Republic of Central America)

On 3 September 2008, Nicaraguan President Daniel Ortega who spoke at a rally on the occasion of the 29th anniversary of establishing the Sandinista armed forces, announced that his government recognised the independence of two regions of Georgia – Abkhazia and the Tskhinvali Region (also known as Samachablo, and recently publicised as South Ossetia) – and he expressed full consent with Russia’s position.

On 5 September 2008, President Ortega issued official decrees on recognising the independence of both regions. Those documents officially recognised Abkhazia and South Ossetia as 'members of the community of the world’s independent states'. Pursuant to the constitution, the decrees by the Nicaraguan President are final official acts of recognising state independence and do not require approval of the Nicaraguan parliament.