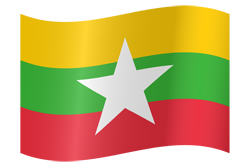 Country: Republic of the Union of Myanmar (Burma) 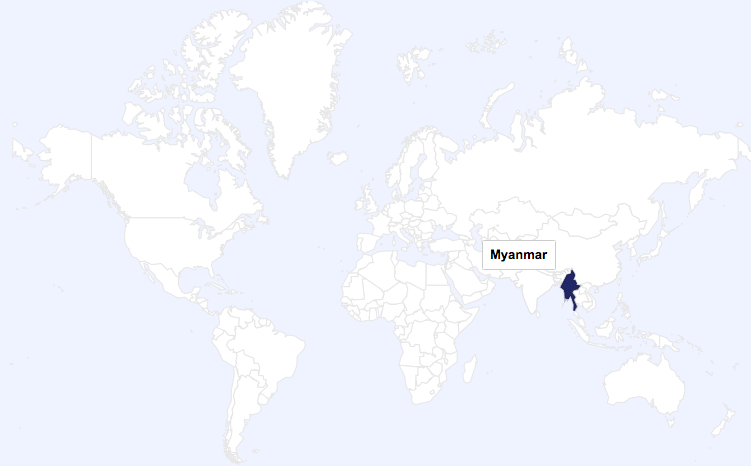 The country that goes under two names – Burma and Myanmar, officially the Republic of the Union of Myanmar, is a sovereign state in Southeast Asia. Burma is bordered by India and Bangladesh to its west, Thailand, and Laos to its east, and China to its north and northeast. To its south, about one-third of Burma's total perimeter of 5,876 km forms an uninterrupted coastline of 1,930 km along the Bay of Bengal and the Andaman Sea.

The country's population is over 54 million (as of 2018). Naypyidaw is the capital city while the former capital Yangon (Rangoon) is the largest city in Burma. The current flag of Burma was adopted in 2010.

In 1989 the military government officially changed the English translations of many names dating back to Burma's colonial period or earlier, including that of the country itself: Burma became Myanmar. Renaming remains a contested issue. Many political and ethnic opposition groups and countries continue to use Burma because they do not recognise the legitimacy of the ruling military government or its authority to rename the country.

In April 2016, soon after taking office, Aung San Suu Kyi clarified that foreigners are free to use either name, 'because there is nothing in the constitution of our country that says that you must use any term in particular'. Countries that do not officially recognise that name use the long-form 'Union of Burma' instead.

In English, the country is popularly known as either Burma or Myanmar. Both these names are derived from the name of the majority Burmese Bamar ethnic group. Myanmar is considered to be the literary form of the name of the group, while Burma is derived from 'Bamar', the colloquial form of the group's name. Depending on the register used, the pronunciation would be Bama (or Myamah). Myanmar is pronounced in at least nine different ways in English.

The name Burma has been in use in English since the 18th century. Burma continues to be used in English by the governments of many countries, such as Canada and the United Kingdom. Official United States policy retains Burma as the country's name, although the State Department's website lists the country as 'Burma (Myanmar)'.

The United Nations uses Myanmar. Most English-speaking international news media refer to the country by the name Myanmar, including the BBC, CNN, and Reuters.

Myanmar is known with a name deriving from Burma as opposed to Myanmar in Spanish, Italian, Romanian, and Greek – Birmania being the local version of Burma in the Spanish language, for example. Myanmar used to be known as 'Birmânia' in Portuguese, and as 'Birmanie' in French. French-language media still consistently use Birmanie.

Early civilisations in Burma included the Tibeto-Burman-speaking Pyu city-states in Upper Burma and the Mon kingdoms in Lower Burma.

In the 9th century, the Bamar people entered the upper Irrawaddy valley and, following the establishment of the Pagan Kingdom in the 1050s, the Burmese language, culture, and Theravada Buddhism slowly became dominant in the country.

The Pagan Kingdom fell due to the Mongol invasions and several warring states emerged. In the 16th century, reunified by the Taungoo Dynasty, the country was for a brief period the largest empire in the history of Mainland Southeast Asia.

In the early 19th century, the Konbaung Dynasty ruled over an area that included modern Burma and briefly controlled Manipur and Assam as well.

The British took over the administration of Burma after three Anglo-Burmese Wars in the 19th century and the country became a British colony. Burma was granted independence in 1948, as a democratic nation. Following a coup d'état in 1962, it became a military dictatorship under the Burma Socialist Programme Party.

In 2011 the military junta was officially dissolved following a 2010 general election, and a nominally civilian government was established. This, along with the release of Aung San Suu Kyi and political prisoners, has improved the country's human rights record and foreign relations and has led to the easing of trade and other economic sanctions.

In the 2015 elections, Aung San Suu Kyi's party won a majority in both houses. However, the Burmese military remains a powerful force in politics.

Burma is rich in jade and gems, oil, natural gas, and other mineral resources.

The national anthem is Kaba Ma Kyei ('Till the End of the World'). The melody and lyrics were written by Saya Tin. It has been the national anthem of Myanmar since 1947. The preamble of the anthem is in the traditional Burmese style, before transitioning into a Western-style orchestra. According to the Constitution of Myanmar (2008), the complete version of Kaba Ma Kyei includes both the anthem in traditional Burmese style and Western style. The complete version is usually used on domestic occasions. A long-standing tradition is that those who sing Kaba Ma Kyei bow at the end, as a show of respect for the nation and its anthem.