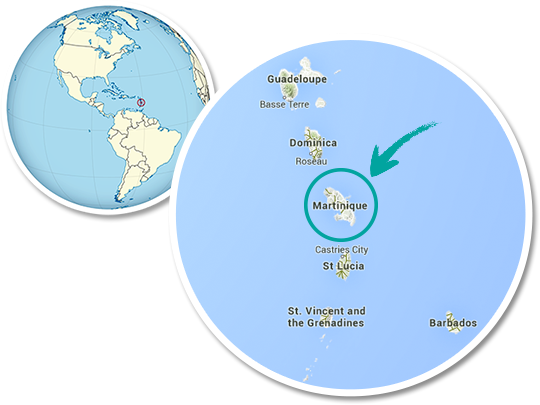 Martinique is an insular region of France located in the Lesser Antilles of the West Indies in the eastern Caribbean Sea, with a land area of 1,128 square km and a population of 385,551 inhabitants (January 2013). Consisting of a single overseas department, it is one of the eighteen regions of France (being an overseas region) and an integral part of the French Republic.

The capital of Martinique, Fort-de-France, is one of the major cities in the Caribbean. Originally named Fort-Royal, the administrative capital of Martinique was over-shadowed by Saint-Pierre, the oldest city in the island, which was renowned for its commercial and cultural vibrancy as 'The Paris of the Caribbean'. The city was renamed to 'Fort-La-Republique' during the French Revolution and finally settled as Fort-de-France sometime in the 19th century. The old name of Fort-Royal is still used in its Creole language form of 'Foyal', with the inhabitants of the city being 'Foyalais'.

As part of France, Martinique is part of the European Union, and its currency is the euro. The Martinicans are French citizens with full political and legal rights. Martinique sends four deputies to the French National Assembly and two senators to the French Senate.

One of the Windward Islands, Martinique is north of Saint Lucia, southeast of Greater Antilles, northwest of Barbados, and south of Dominica. The official language is French; the local population speaks Antillean Creole (Créole Martiniquais), too.