Motto: Quocunque Jeceris Stabit (Latin: Whithersoever you throw it, it will stand)

Drives on the left/right 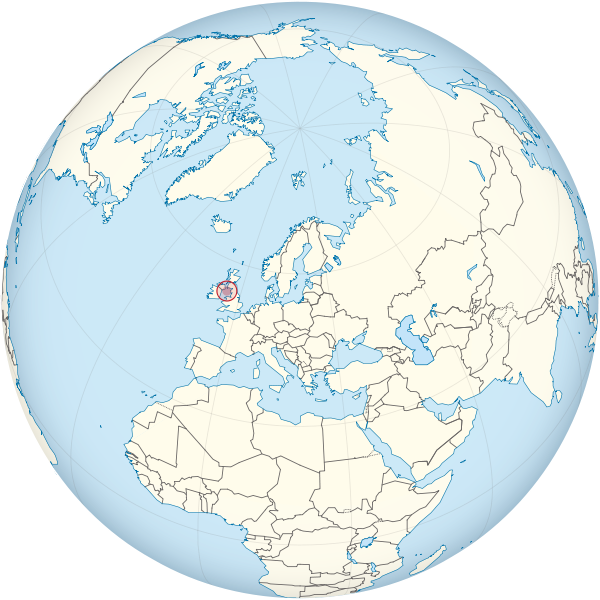 The Isle of Man (Manx: Ellan Vannin) is a self-governing British Crown dependency in the Irish Sea between Great Britain and Ireland. The head of state is the British monarch who holds the title of Lord of Mann and is represented by a Lieutenant Governor. Defence of the Isle of Man is the responsibility of the United Kingdom. The official language of the Isle of Man is English. Manx has traditionally been spoken but is now considered 'critically endangered'.

The island was cut off from the surrounding islands around 8000 BC and was colonised by sea sometime before 6500 BC. The first residents were hunter-gatherers and fishermen. Examples of their tools are kept at the Manx Museum. The Neolithic Period marked the beginning of farming, and megalithic monuments began to appear. During the Bronze Age, burial mounds became smaller. Bodies were put in stone-lined graves with ornamental containers.

The ancient Romans knew of the island and called it Insula Manavia, although it is uncertain whether they conquered the island or not. Around the 5th century AD, large-scale migration from Ireland precipitated a process of Gaelicisation evidenced by Ogham inscriptions, giving rise to the Manx language, which is closely related to Irish and Scottish Gaelic.

Viking arrived at the end of the 8th century. They established Tynwald and introduced many land divisions that still exist. In 1266 King Magnus VI of Norway ceded the islands to Scotland in the Treaty of Perth; but Scotland's rule over Mann did not become firmly established until 1275, when the Manx were defeated in the Battle of Ronaldsway, near Castletown.

In 1290 King Edward I of England sent Walter de Huntercombe to take possession of Mann. It remained in English hands until 1313, when Robert Bruce took it after besieging Castle Rushen for five weeks. A confusing period followed when Mann was sometimes under English rule and sometimes Scottish, until 1346, when the Battle of Neville's Cross decided the long struggle between England and Scotland in England's favour.

In 1866 the Isle of Man obtained a limited home rule, with partly democratic elections to the House of Keys, but an appointed Legislative Council. Under British law, the Isle of Man is not part of the United Kingdom. However, the United Kingdom is responsible for the island's defence and ultimately for good governance, and for representing the island in international forums; the island's own parliament and government have competence over all domestic matters. There are no independent military forces on the Isle of Man.

Citizenship in the Isle of Man is governed by British law. Although Manx passport holders are British citizens, because the Isle of Man is not part of the European Union, people born on the island without a parent or grandparent either born, naturalised, registered or resident for more than five consecutive years in the United Kingdom do not have the same rights as other British citizens with regard to employment and establishment in the EU.

EU citizens are entitled to travel and reside, but not work, in the island without restriction. Manx citizens — without the hereditary qualification outlined above — are similarly restricted from working in the EU.

Healthcare is free for residents and visitors from the UK.

Since the Isle of Man is neither part of the European Union, nor has a special status, it did not take part in the 2016 referendum on the UK's EU membership.

The Isle of Man has become a centre for emerging private space travel companies. A number of the competitors in the Google Lunar X Prize, a $30 million competition for the first privately funded team to send a robot to the Moon, are based on the island. The team summit for the X Prize was held on the island in October 2010. In January 2011 two research space stations owned by Excalibur Almaz arrived on the island and were kept in an aircraft hangar at the airfield at the former RAF Jurby.

The National Anthem of the Isle of Man (Manx: Arrane Ashoonagh Vannin), was written and composed by William Henry Gill (1839-1923), with the Manx translation by John J. Kneen (1873-1939). The anthem is titled for its incipit, O Land of Our Birth (Manx: 'O Halloo Nyn Ghooie'). It is sung to an adaptation of the traditional Manx melody of 'Mylecharaine’s March', which had been described as the 'Manx national melody' long before Gill's composition.

The words that originally accompanied the melody date to around 1800 and concern the impoverishment of a father to pay a dowry. However, those curious words have been identified as disparate pieces of older songs amalgamated together incompletely. First performed at the Manx Music Festival on 21 March 1907, there are eight verses in total in the modern anthem, but only the first verse is usually sung.

The anthem was given official status by the Isle of Man's legislature, Tynwald, on 22 January 2003, with 'God Save the Queen' being designated as the Royal Anthem. The National Anthem is used on official and ceremonial occasions and in schools; the Royal Anthem is normally reserved for use additionally on those occasions when the Sovereign, members of the Royal Family, or the Lieutenant Governor are present.

The traditional song "Ellan Vannin" ('Isle of Man') had up to the point to be an equal unofficial national anthem and had been re-popularised by Bee Gees when the group released it as a single in 1997.

In March 2015 the anthem was mistakenly played instead of the National Anthem of El Salvador at a friendly football match between El Salvador and Argentina at FedExField in Landover (Maryland).