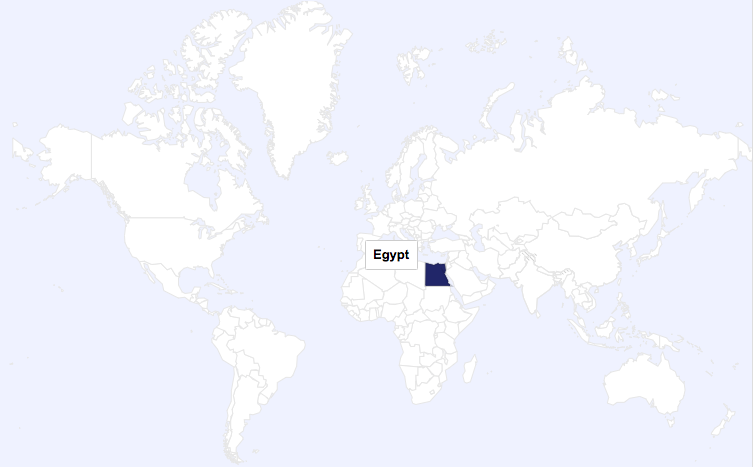 Egypt, officially, the Arab Republic of Egypt, is a transcontinental country spanning the northeast corner of Africa and southwest corner of Asia by a land bridge formed by the Sinai Peninsula.

Egypt is a Mediterranean country bordered by the Gaza Strip and Israel to the northeast, the Gulf of Aqaba to the east, the Red Sea to the east and south, Sudan to the south, and Libya to the west.

Sharm el-Sheikh is an Egyptian resort town between the desert of the Sinai Peninsula and the Red Sea. Naama Bay, with a palm tree-lined promenade, is filled with bars and restaurants.

The English name Egypt is derived from the Ancient Greek Aígyptos, via Middle French Egypte and Latin Aegyptus. The Greek forms were borrowed from Late Egyptian (Amarna) Hikuptah 'Memphis', a corruption of the earlier Egyptian name meaning 'home of the ka (soul) of Ptah', which meant the temple to the god Ptah at Memphis.

Strabo attributed the word to a folk etymology in which Aígyptos evolved as a compound from Aigaiou huptiōs, meaning 'below the Aegean'.

The ancient Egyptian name of the country was km.t, which means black land, likely referring to the fertile black soils of the Nile flood plains, distinct from the deshret, or 'red land' of the desert. This name is commonly vocalised as Kemet; however, it was probably pronounced [kuːmat] in ancient Egyptian.

Miṣr is the Classical Quranic Arabic and modern official name of Egypt, while Maṣr is the local pronunciation in Egyptian Arabic. The name is of Semitic origin, directly cognate with other Semitic words for Egypt such as the Hebrew Mitzráyim. The oldest attestation of this name for Egypt is the Akkadian miṣru, related to miṣru/miṣirru/miṣaru, meaning 'border' or 'frontier'.

Islam is the official religion of Egypt and Arabic is its official language. Religion in Egypt controls many aspects of social life and is endorsed by law. Egypt is predominantly Muslim with a sizeable Christian population, although estimates vary greatly in the absence of official statistics. Egypt hosts two major religious institutions: Al-Azhar Mosque, founded in 970 AD by the Fatimids as the first Islamic university in Egypt and the Coptic Orthodox Church of Alexandria established in the middle of the 1st century by Saint Mark.

In Egypt Muslims and Christians live as neighbours, sharing a common history, national identity, ethnicity, race, culture, and language. In 2002, under the Mubarak government, Coptic Christmas (7th of January) was recognised as an official holiday.

From the 16th century to the beginning of the 20th century, Egypt was ruled by foreign imperial powers: The Ottoman Empire and the British Empire.

Egypt remained a de jure Ottoman province until 5 November 1914, when it was declared a British protectorate in reaction to the decision of the Young Turks of the Ottoman Empire to join World War I on the side of the Central Powers. In 1914 the Protectorate was made official, and the title of the head of state was changed to the sultan, to repudiate the vestigial suzerainty of the Ottoman sultan who was backing the Central powers in World War I.

Modern Egypt dates back to 1922 when it gained nominal independence from the British Empire as a monarchy. However, British military occupation of Egypt continued and many Egyptians believed that the monarchy was an instrument of British colonialism.

In 1936 the Anglo-Egyptian Treaty was signed. Continued instability due to remaining British influence and increasing political involvement by the king led to the dissolution of the parliament in a military coup d'état, known as the 1952 Revolution. The Free Officers Movement forced King Farouk to abdicate in support of his son Fuad.

British military presence in Egypt lasted until 1954. After Egypt expelled the British and ended the occupation, the country nationalised the British-held Suez Canal and declared itself a republic.

Bilādī, laki ḥubbī wa fūʾādī ('My homeland, you have my love and my heart') is the national anthem of Egypt. The melody was composed by Sayed Darwish and it was adopted in 1979. This anthem replaced 'Walla Zaman Ya Selahy' ('Oh My Weapon'), which was the national anthem of the United Arabic Republic (UAR), a federation of Egypt and Syria from 1960. Though the UAR broke up in 1961, Egypt retained the official name of the union until 1971, and the official anthem until 1979.

Egypt's first national anthem dated back to 1869 when a royal anthem was composed to honour the monarch. It is unclear how long this anthem was in use. Although the monarchy was deposed in 1952, the anthem was used as part of the anthem of the United Arab Republic with Syria in 1958.

The lyrics for 'Bilady, Bilady, Bilady' were written by Mohamed Younis Al-Qady and Sayed Darwish composed the music and maintained close ties with early leaders of the national movement for independence in Egypt, such as Mostafa Kamel – a lawyer, journalist, and nationalist activist who strongly opposed the United Kingdom's occupation of Egypt and Sudan. The chorus of Egypt's national anthem was derived from one of Kamel's most famous speeches.

In 1949-1953 the mausoleum of Mostafa Kamel was built on Saladin Square, near Cairo's Citadel, in neo-Mamluk style; it has been reopened to the public as a museum from 8th February 2001.