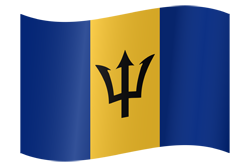 Member of the Commonwealth of Nations: 1966 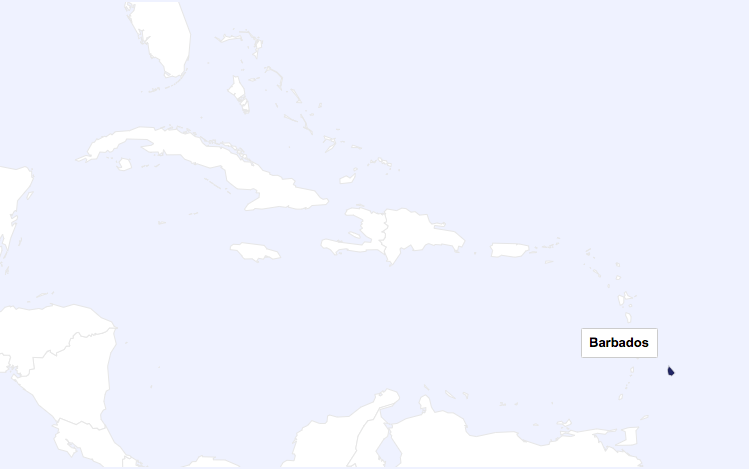 Barbados is an island country in the Lesser Antilles of the West Indies, in the Caribbean region of North America. It is 34 km in length and up to 23 km in width, covering an area of 432 square km. Its capital and the largest city is Bridgetown.

It is uncertain which European nation arrived first in Barbados. It could have been either the Spanish or the Portuguese, en route to Brazil. Therefore, the name Barbados is either the Portuguese word Os Barbados or the Spanish equivalent Los Barbados, both meaning 'the bearded ones'. It is unclear whether 'bearded' refers to the long, hanging roots of the bearded fig-tree (Ficus ctrifolia), or to the allegedly bearded Caribs once inhabiting the island, or to a visual impression of a beard formed by the sea foam that sprays over the outlying reefs.

In 1519 a map produced by the Genoese mapmaker Visconte Maggiolo showed and named Barbados in its correct position.

Colloquially Barbadians refer to their home island as 'Bim' or 'Bimshire'. The origin is uncertain, although several theories exist. The National Cultural Foundation of Barbados says that 'Bim' was a word commonly used by slaves and it derives from the Igbo term bém from bé mụ́ meaning 'my home, kindred, kind'. The words 'Bim' and 'Bimshire' are recorded in the Oxford English Dictionary and Chambers Twentieth Century Dictionaries.

Amerindian settlement of Barbados dates to about the 4th to 7th centuries AD, by a group known as the Saladoid-Barrancoid. The Arawaks from South America became dominant around 800 AD and maintained that status until around 1200.

Inhabited by Kalinago people since the 13th century, Barbados was visited by Spanish navigators in the late 15th century and claimed for the Spanish Crown. It first appeared on a Spanish map in 1511.

The Portuguese visited the island in 1536 but they left it unclaimed, with their only remnants being an introduction of wild hogs for a good supply of meat whenever the island was visited.

The first English ship, the Olive Blossom, which was captained by John Powell, arrived in Barbados on 14 May 1625; its men took possession of it in the name of King James I. On 17 February 1627 the first permanent settlers, led by John Powell's younger brother, Henry, arrived from England. The group consisting of 80 settlers and 10 English labourers. The latter were young indentured labourers who, according to some sources, had been abducted, effectively making them slaves. It became an English and later, British colony.

Barbados eventually had one of the world's biggest sugar industries. As a wealthy sugar colony, it became an English centre of the African slave trade until that trade was outlawed in 1807.

On 30 November 1966 Barbados became an independent state and Commonwealth realm with the British monarch as hereditary head of state. Barbados is divided into 11 parishes: Christ Church, Saint Andrew, Saint George, Saint James, Saint John, Saint Joseph, Saint Lucy, Saint Michael, Saint Peter, Saint Philip, Saint Thomas. Saint George and Saint Thomas are in the middle of the country and are the only parishes without coastlines.

Close to 90% of all Barbadians (also known colloquially as 'Bajans') are of Afro-Caribbean descent ('Afro-Bajans') and mixed-descent. The remainder of the population includes groups of Europeans ('Anglo-Bajans' or 'Euro-Bajans') mainly from the United Kingdom and Ireland, along with Asians, predominantly Chinese and Indians (both Hindu and Muslim). Other groups in Barbados include people from the United Kingdom, the United States, and Canada.

Barbadians who return after years of residence in the United States and children born in America to Bajan parents are called 'Bajan Yankees', a term considered derogatory by some. Generally, Bajans recognise and accept all 'children of the island' as Bajans. Most Barbadians of African and European descent are Christians (95%), the largest denomination being Anglican (40%). Homosexual acts are illegal in Barbados and the colonial era law bears a maximum sentence of life in prison; however, the law is very rarely enforced.

In music the nine-time Grammy Award winner, pop star Rihanna is a native of Barbados, born in Saint Michael.

The country generally experiences two seasons, one of which includes noticeably higher rainfall. Known as the 'wet season', this period runs from June to November. By contrast, the 'dry season' runs from December to May.

Barbados is regarded as a tropical monsoon climate. However, breezes of 12 to 16 km/h abound throughout the year and give Barbados a climate, which is moderately tropical.

Despite being classified as an Atlantic island, Barbados is considered to be a part of the Caribbean, where it is ranked as a leading tourist destination. Forty per cent of the tourists come from the UK, with the US and Canada making up the next large groups of visitors to the island.