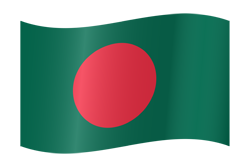 Member of the Commonwealth of Nations: 1972 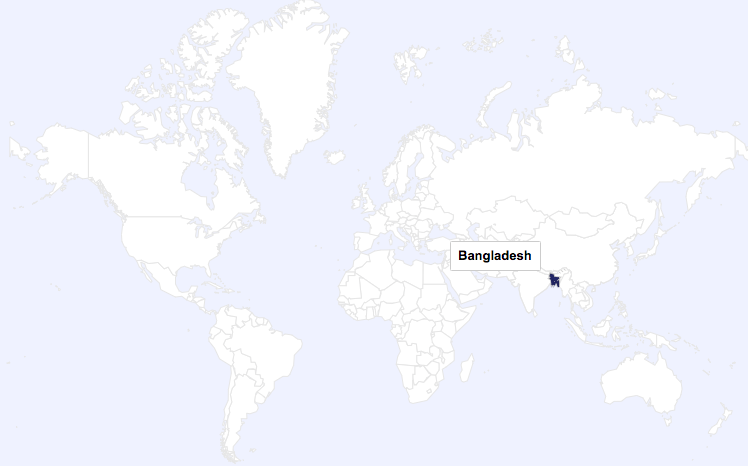 Bangladesh, officially the People's Republic of Bangladesh, is a country in South Asia. It shares land borders with India and Myanmar (former Burma). Nepal, Bhutan, and China are located near Bangladesh without sharing a border. Bangladesh is the world's eighth most populous country. Dhaka is its capital and largest city, followed by Chittagong, which has the country's largest port. Bangladesh forms the largest and easternmost part of the Bengal region.

Bangladeshis include people from a range of ethnic groups and religions. Bengalis, who speak the official Bengali language, make up 98% of the population. The politically dominant Bengali Muslims make the nation the world's third largest Muslim-majority country. Islam is the official religion of Bangladesh. More than 85% of the population are Muslims. Although the Bangladeshi are proud to have a moderate Muslim country, unlike Pakistan and Afghanistan. It is legally experienced a free dress code and no foreigners are told what to wear.

Bengali or Bangla is the official language of the country. English is the second language as children learn it in the schools from grade one.

Most of Bangladesh is covered by the Bengal Delta, the largest delta on Earth. The country has 700 rivers and 8,046 km of inland waterways.

Highlands with evergreen forests are found in the northeastern and southeastern regions of the country. Bangladesh has many islands and a coral reef. The longest unbroken sea beach of the world, Cox's Bazar Beach, is located in the southeast.

The Sundarbans is the largest mangrove forest in the world. The country's biodiversity includes a vast array of plant and wildlife, including endangered Bengal tigers, the national animal.

Greek and Roman records of the ancient Gangaridai Kingdom, which (according to legend) deterred the invasion of Alexander the Great, are linked to the fort in Wari-Bateshwar. The site is also identified with the prosperous trading centre of Souanagoura listed on Ptolemy's world map. Roman geographers noted a large seaport in southeastern Bengal, corresponding to the present-day Chittagong region.

Ancient Buddhist and Hindu states, which ruled Bangladesh, had well-developed currencies, banking, shipping, architecture, and art. The ancient universities of Bikrampur and Mainamati hosted scholars and students from other parts of Asia. The earliest form of the Bengali language began to emerge during the eighth century.

The Islamic conquest of Bengal began with the 1204 invasion by Bakhtiar Khalji. Bengal was ruled by the Delhi Sultanate for a century by governors from the Mamluk, Balban and Tughluq dynasties. During the 14th century, an independent Bengal Sultanate was established by rebel governors.

After the 1757 Battle of Plassey, Bengal was the first region of the Indian subcontinent conquered by the British East India Company. The company formed the Presidency of Fort William, which administered the region until 1858. A notable aspect of company rule was the Permanent Settlement, which established the feudal zamindari system. A number of famines, including the great Bengal famine of 1770, occurred under company rule. Several rebellions broke out during the early 19th century but British rule displaced the Muslim ruling class. A conservative Islamic cleric, Haji Shariatullah, sought to overthrow the British by propagating Islamic revivalism. Several towns in Bangladesh participated in the Indian Mutiny and pledged allegiance to the last Mughal emperor, Bahadur Shah Zafar, who was later exiled to neighbouring Burma.

The challenge posed to company rule by the failed Indian Mutiny led to the creation of the British Indian Empire as a crown colony, and the first railway was built in 1862. Syed Ahmed Khan and Ram Mohan Roy promoted modern and liberal education on the subcontinent, inspiring the Aligarh movement and the Bengal Renaissance. During the late 19th century, novelists, social reformers and feminists emerged from Muslim Bengali society. Electricity and municipal water systems were introduced in the 1890s. Cinema theatres opened in many towns during the early 20th century. East Bengal's plantation economy was important to the British Empire, particularly its jute and tea. The British established tax-free river ports, such as the Port of Narayanganj, and large seaports like the Port of Chittagong.

Social tensions also increased under British rule, particularly between wealthy Hindus and the Muslim-majority population. The Permanent Settlement made millions of Muslim peasants tenants of Hindu estates, and resentment of the Hindu landed gentry grew. Supported by the Muslim aristocracy, the British government created the province of Eastern Bengal and Assam in 1905. The new province received increased investment in education, transport, and industry. However, the first partition of Bengal created an uproar in Calcutta and the Indian National Congress. In response to growing Hindu nationalism, the All India Muslim League was formed in Dhaka during the 1906 All India Muhammadan Educational Conference. The British government reorganised the provinces in 1912, reuniting East and West Bengal and making Assam a second province.

The Bengal Provincial Muslim League was formed in 1913 to advocate civil rights for Bengali Muslims within a constitutional framework. During the 1920s the league was divided into factions supporting the Khilafat movement and favouring cooperation with the British to achieve self-rule. Segments of the Bengali elite supported Mustafa Kemal Ataturk secularist forces. In 1929 the All Bengal Tenants Association was formed in the Bengal Legislative Council to counter the influence of the Hindu landed gentry, and the Indian Independence and Pakistan Movements strengthened during the early 20th century. After the Morley-Minto Reforms and the diarchy era in the legislatures of British India, the British government promised limited provincial autonomy in 1935. The Bengal Legislative Assembly, British India's largest legislature, was established in 1937. In 1946 the Bengal Provincial Muslim League won the provincial election, taking 113 of the 250-seat assembly (the largest Muslim League mandate in British India). H. S. Suhrawardy who made a final futile effort for a United Bengal in 1946, was the last premier of Bengal.

On 6 July, the Sylhet region of Assam voted in a referendum to join East Bengal. Cyril Radcliffe was tasked with drawing the borders of Pakistan and India, and the Radcliffe Line established the borders of present-day Bangladesh. The Dominion of Pakistan was created on 14 August 1947.

East Bengal, with Dhaka as its capital, was the most populous province of the 1947 Pakistani federation (led by Governor General Muhammad Ali Jinnah who promised freedom of religion and secular democracy in the new state). East Bengal was also Pakistan's most cosmopolitan province, home to people of different faiths, cultures and ethnic groups. Partition gave increased economic opportunity to East Bengalis, producing an urban population during the 1950s.

Pakistan adopted its first constitution in 1956. Three Bengalis were its Prime Minister until 1957, but none of the three completed their terms and resigned from office. The Pakistan Army imposed military rule in 1958, and Ayub Khan was the country's strongman for 11 years. Political repression increased after the coup. Khan introduced a new constitution in 1962, replacing Pakistan's parliamentary system with a presidential and gubernatorial system (based on electoral college selection) known as Basic Democracy.

The Bengali population was angered when Prime Minister-elect Sheikh Mujibur Rahman was prevented from taking the office. Civil disobedience erupted across East Pakistan, with calls for independence. Mujib addressed a pro-independence rally of nearly 2 million people in Dacca on 7 March 1971. He said, 'This time the struggle is for our freedom. This time the struggle is for our independence'. The flag of Bangladesh was raised for the first time on 23 March, Pakistan's Republic Day. During the Bangladesh Liberation War, Bengali nationalists declared independence and formed the Mukti Bahini (the Bangladeshi National Liberation Army).

The Provisional Government of Bangladesh was established on 17 April 1971, converting the 469 elected members of the Pakistani national assembly and East Pakistani provincial assembly into the Constituent Assembly of Bangladesh. The provisional government issued the Proclamation of the Independence of Bangladeshi, which was the country's interim constitution and declared 'equality, human dignity, and social justice' as its fundamental principles. Due to Mujib's detention, the acting president was Syed Nazrul Islam while Tajuddin Ahmad was Bangladesh's first prime minister.

The military wing of the provisional government was the Bangladesh Forces that included Mukti Bahini and other Bengali guerilla forces. Led by General M. A. G. Osmani and eleven sector commanders, the forces strongly held the countryside during the war and conducted wide-ranging guerrilla operations against Pakistani forces. As a result, almost the entire country except capital Dacca was liberated by Bangladesh Forces by late November. This led Pakistan Army to attack neighbouring India's western front on 2 December. India retaliated both in western and eastern fronts. By joint Bangladeshi ground advance and Indian air strike, the rest capital Dacca was liberated from Pakistani occupation in mid-December.

During the last phase of the war, the Soviet Union and the United States dispatched naval forces to the Bay of Bengal in a Cold War standoff. The 9-month war ended with the surrender of Pakistani armed forces to the Bangladesh-India Allied Forces on 16 December 1971. Under international pressure, Pakistan released Rahman from imprisonment on 8 January 1972 and he was flown by the British Royal Air Force of to a million-strong homecoming in Dacca. Remaining Indian troops were withdrawn by 12 March 1972, three months after the war ended.

Dhaka is the capital city of Bangladesh, with a population of about 16 million people. Of course, it is about priorities, likes and dislikes of a visitor whether they enjoy staying in this city of a crowd, traffic, and constant chaos or not, but anyone with a passion for history and delicious food will definitely find lots to love about Dhaka. September through March is the best period for visiting Bangladesh as there is no rain and the weather is mild.

In the southern part of Dhaka known as Old Dhaka, there is live and vibrant Buriganga river, which defines the end of the capital. The river is as busy as the streets of the city. Most of the tourists enjoy a boat trip on Buriganga river as well as riding on a rickshaw through the small streets of Dhaka.

The backstreets of Old Dhaka: Shakhari Bazar, Chawk Bazar, Begum Bazar, Islampur Road, Bongshal Road, and others are worth to explore, especially, for those who love taking photos. Drinking tea on a street tea stall while discovering Dhaka would make a visitor feel like a local. However, New Market is the best place to go for shopping.

Biriyani is the most famous food in Dhaka. In fact, for many foreigners, this is love from the first bite that leads towards undying devotion to Bangladeshi cuisine. Hajir Biryani and Nanna Biriyani are named to be two of the most famous Biriyani shops in Old Dhaka. However, any Biriyani cooked by a Bangladeshi chief in any part of the world will give unforgettable memories.

It is quite common to see Bangladeshi people travelling on the roofs of buses and trains as it costs them less. It costs about 10% of the price to travel on a bus roof while it is completely free to travel on a train roof as no one climbs up to check tickets there. Still, this is not an everyday habit and happens only three times a year, during two Eids and Ijtema.

Amar Shonar Bangla ("My Golden Bengal") is the national anthem of Bangladesh. An Ode to Mother Bengal was written by Rabindranath Tagore in 1905, during the first partition of Bengal, when ruling British Empire had an undivided province of Bengal Presidency split into two parts; the decision was announced on 19 July by the then-Viceroy of India Lord Curzon, taking effect on 16 October. This divide of Bengal had undermined India's national movement against British imperialism.

The word shonar literally means 'made of gold' or 'beloved', but in the song, 'Shonar Bangla' may be interpreted to either express the preciousness of Bengal or refer to the colour of paddy fields before harvest.