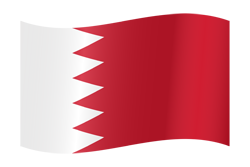 Patron saint: Our Lady of Arabia (the Blessed Virgin Mary holding a Rosary and the Child Jesus)

Bahrain, officially the Kingdom of Bahrain, is an Arab constitutional monarchy in the Persian Gulf. It is an island country, situated between the Qatar peninsula and the northeastern coast of Saudi Arabia, to which it is connected by the 25-kilometre King Fahd Causeway. Bahrain's population is 1,234,571 (c. 2010), including 666,172 non-nationals. It is 765.3 square kilometres in size, making it the third-smallest nation in Asia after the Maldives and Singapore.

Bahrain is the site of the ancient Dilmun civilisation. It was one of the earliest areas to convert to Islam in 628 AD. Following a period of Arab rule, Bahrain was occupied by the Portuguese in 1521, who in turn were expelled in 1602 by Shah Abbas I of the Safavid dynasty under the Persian Empire. In 1783 the Bani Utbah clan captured Bahrain from Nasr Al-Madhkur and it has since been ruled by the Al Khalifa royal family, Almed al Fateh being the first hakim of Bahrain.

In the early 19th century, Bahrain was invaded by both the Omanis and the Al Sauds. In 1802 it was governed by a 12-year-old child, when the Omani ruler Sayyid Sultan installed his son, Salim, as Governor in the Arad Fort. In 1816 the British political resident in the Gulf, William Bruce, received a letter from the Sheikh of Bahrain who was concerned about a rumour that Britain would support an attack on the island by the Imam of Muscat. He sailed to Bahrain to reassure the Sheikh that this was not the case and drew up an informal agreement assuring the Sheikh that Britain would remain a neutral party.

In 1820 the Al Khalifa tribe were recognised by Great Britain as the rulers ('Al-Hakim' in Arabic) of Bahrain after signing a treaty relationship. However, ten years later they were forced to pay yearly tributes to Egypt despite seeking Persian and British protection.

In 1860 the Al Khalifas used the same tactic when the British tried to overpower Bahrain. Writing letters to the Persians and Ottomans, Al Khalifas agreed to place Bahrain under the latter's protection in March due to offering better conditions. Eventually, the Government of British India overpowered Bahrain when the Persians refused to protect it. Colonel Pelly signed a new treaty with Al Khalifas placing Bahrain under British rule and protection.

Following the Qatari-Bahraini War in 1868, British representatives signed another agreement with the Al Khalifas. It specified that the ruler could not dispose of any of his territories except to the United Kingdom and could not enter into relationships with any foreign government without British consent. In return, the British promised to protect Bahrain from all aggression by sea and to support in case of land attack. More importantly, the British promised to support the rule of the Al Khalifa in Bahrain, securing its unstable position as rulers of the country. Other agreements in 1880 and 1892 sealed the protectorate status of Bahrain to the British.

Unrest amongst the people of Bahrain began when Britain officially established complete dominance over the territory in 1892. The first revolt and widespread uprising took place in March 1895 against Sheikh Issa bin Ali, then the ruler of Bahrain. Sheikh Issa was the first of the Al Khalifa to rule without Persian relations. Sir Arnold Wilson, Britain's representative in the Persian Gulf and author of The Persian Gulf, arrived in Bahrain from Muscat at this time. The uprising developed further with some protesters killed by British forces.

Before the development of the petroleum, the island was largely devoted to pearl fisheries and, as late as the 19th century, was considered to be the finest in the world. Prior to the First World War, there were about 400 vessels hunting pearls and an annual export of more than £30,000.

In 1911 a group of Bahraini merchants demanded restrictions on the British influence in the country. The group's leaders were subsequently arrested and exiled to India. In 1923, the British introduced administrative reforms and replaced Sheikh Issa bin Ali with his son. Some clerical opponents and families such as al Dossari left or were exiled to Saudi Arabia and Iran.

Three years later the British placed the country under the de facto rule of Charles Belgrave who operated as an adviser to the ruler until 1957. Belgrave brought a number of reforms such as the establishment of the country's first modern school in 1919, the Persian Gulf's first girls' school in 1928, and the abolition of slavery in 1937. At the same time, the pearl diving industry developed at a rapid pace.

In 1927 Reza Shah, then the Shah of Iran, demanded sovereignty over Bahrain in a letter to the League of Nations, a move that prompted Belgrave to undertake harsh measures including encouraging conflicts between Shia and Sunni Muslims in order to bring down the uprisings and limit the Iranian influence. Belgrave even went further by suggesting to rename the Persian Gulf to the 'Arabian Gulf'. However, the proposal was refused by the British government. Britain's interest in the development of Bahrain was motivated by concerns over Saudi and Iranian ambitions in the region.

The Bahrain Petroleum Company (Bapco), a subsidiary of the Standard Oil Company of California (Socal), discovered oil in 1931 and production began the following year. This was to bring rapid modernisation to Bahrain. Relations with the United Kingdom became closer, as evidenced by the British Royal Navy moving its entire Middle Eastern command from Bushehr in Iran to Bahrain in 1935.

Bahrain participated in the Second World War on the Allied side, joining on 10 September 1939. On 19 October 1940, four Italian SM.82s bombers bombed Bahrain alongside Dhahran oilfields in Saudi Arabia, targeting Allied-operated oil refineries. Although minimal damage was caused in both locations, the attack forced the Allies to upgrade Bahrain's defences, an action which further stretched Allied military resources.

After World War II, increasing anti-British sentiment spread throughout the Arab World and led to riots in Bahrain. The riots focused on the Jewish community. In 1948, following rising hostilities and looting, most members of Bahrain's Jewish community abandoned their properties and evacuated to Bombay, later settling in Israel (Pardes Hanna-Karkur) and the United Kingdom.

In 1971 Bahrain declared independence. Formerly an emirate, Bahrain was declared a kingdom in 2002. In 2011 the country experienced protests inspired by the regional Arab Spring.

Bahrain had the first post-oil economy in the Persian Gulf. Since the late 20th century, Bahrain has invested in the banking and tourism sectors. Many large financial institutions have a presence in Manama, the country's capital. It has a high Human Development Index and is recognised by the World Bank as a high-income economy.

Balaleet is a traditional sweet dish popular in the Arab States of the Persian Gulf: Bahrain, Qatar, Oman, Iraq, Kuwait, Saudi Arabia, and the United Arab Emirates (UAE). Traditionally, it consists of vermicelli, sugar, cardamom, saffron, rose water, butter, vegetable oil, and a fried egg. Generally, Balaleet is served during the Islamic holidays of Eid al-Fitr as the first meal of the day.