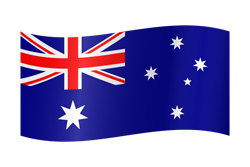 Patron saint: The Virgin Mary (Our Lady Help of Christians)

Member of the Commonwealth of Nations: 1931 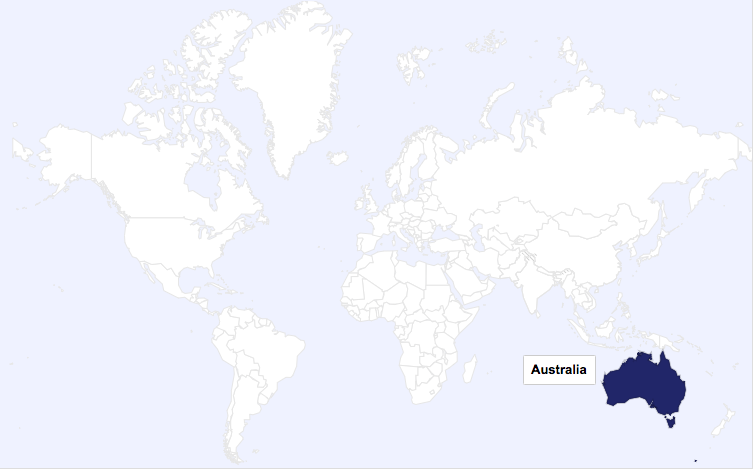 Australia, officially the Commonwealth of Australia, is a sovereign country comprising the mainland of the Australian continent, the island of Tasmania and numerous smaller islands. It is the largest country in Oceania and the world's sixth-largest country by total area. The neighbouring countries are Papua New Guinea, Indonesia and East Timor to the north; the Solomon Islands and Vanuatu to the north-east; and New Zealand to the south-east. The population of 25 million is highly urbanised and heavily concentrated on the eastern seaboard. Australia's capital is Canberra, and its largest city is Sydney. The country's other major metropolitan areas are Melbourne, Brisbane, Perth, and Adelaide, which all have over 1 million inhabitants.

In 1770 James Cook sailed along Australia and mapped the east coast, which he named New South Wales and claimed for Great Britain.

With the loss of its American colonies in 1783, the British Government sent a fleet of ships, the "First Fleet", under the command of Captain Arthur Phillip, to establish a new penal colony in New South Wales. A camp was set up and the flag raised at Sydney Cove, Port Jackson, on 26 January 1788, a date which became Australia's national day, Australia Day.

A British settlement was established in Van Diemen's Land, now known as Tasmania, in 1803, and it became a separate colony in 1825. The United Kingdom formally claimed the western part of Western Australia (the Swan River Colony) in 1828. Separate colonies were carved from parts of New South Wales: South Australia in 1836, Victoria in 1851, and Queensland in 1859. The Northern Territory was founded in 1911 when it was excised from South Australia. South Australia was founded as a "free province" — it was never a penal colony. Victoria and Western Australia were also founded "free", but later accepted transported convicts.  A campaign by the settlers of New South Wales led to the end of convict transportation to that colony; the last convict ship arrived in 1848.

The indigenous population, estimated to have been between 750,000 and 1,000,000 in 1788, declined for 150 years following settlement, mainly due to infectious disease. Thousands more died as a result of frontier conflict with settlers. A government policy of "assimilation" beginning with the Aboriginal Protection Act 1869 resulted in the removal of many Aboriginal children from their families and communities — often referred to as the Stolen Generations — a practice which may also have contributed to the decline in the indigenous population. As a result of the 1967 referendum, the Federal government's power to enact special laws with respect to a particular race was extended to enable the making of laws with respect to Aborigines. Traditional ownership of land ("native title") was not recognised in law until 1992, when the High Court of Australia held in Mabo v Queensland (No 2) that the legal doctrine that Australia had been terra nullius ('land belonging to no one') did not apply to Australia at the time of British settlement.

A gold rush began in Australia in the early 1850s and the Eureka Rebellion against mining licence fees in 1854 was an early expression of civil disobedience. Between 1855 and 1890, the six colonies individually gained responsible government, managing most of their own affairs while remaining part of the British Empire. The Colonial Office in London retained control of some matters, notably foreign affairs, defence, and international shipping.

On 1 January 1901, the Federation of the colonies was achieved after a decade of planning, consultation, and voting. This established the Commonwealth of Australia as a dominion of the British Empire. The Federal Capital Territory (later renamed the Australian Capital Territory) was formed in 1911 as the location for the future federal capital of Canberra. Melbourne was the temporary seat of government from 1901 to 1927 while Canberra was being constructed. The Northern Territory was transferred from the control of the South Australian government to the federal parliament in 1911.

In 1914, Australia joined Britain in fighting World War I, with support from both the outgoing Commonwealth Liberal Party and the incoming Australian Labor Party. Australians took part in many of the major battles fought on the Western Front. Of about 416,000 who served, about 60,000 were killed and another 152,000 were wounded. Many Australians regard the defeat of the Australian and New Zealand Army Corps (ANZACs) at Gallipoli as the birth of the nation — its first major military action. The Kokoda Track campaign is regarded by many as an analogous nation-defining event during World War II.

Britain's Statute of Westminster 1931 formally ended most of the constitutional links between Australia and the UK. Australia adopted it in 1942, but it was backdated to 1939 to confirm the validity of legislation passed by the Australian Parliament during World War II. The shock of the United Kingdom's defeat in Asia in 1942 and the threat of Japanese invasion caused Australia to turn to the United States as a new ally and protector. Since 1951, Australia has been a formal military ally of the US, under the ANZUS treaty.

After World War II Australia encouraged immigration from mainland Europe. Since the 1970s and following the abolition of the White Australia policy, immigration from Asia and elsewhere was also promoted. As a result, Australia's demography, culture, and self-image were transformed. The passing of the Australia Act 1986 ended all possibility for any vestigial role of the British government in the government in Australia and removed the already seldom-used option of judicial appeals to the Privy Council in London.

In a 1999 referendum, 55% of voters and a majority in every state rejected a proposal to become a republic with a president appointed by a two-thirds vote in both Houses of the Australian Parliament. Since the election of the Whitlam Government in 1972, there has been an increasing focus in foreign policy on ties with other Pacific Rim nations, while maintaining close ties with Australia's traditional allies and trading partners.

Religion in Australia is diverse. Section 116 of the Constitution of Australia of 1901 prohibits the Commonwealth government from establishing a church or interfering with the freedom of religion. In an optional question on the 2016 Census, 52.1% of the Australian population declared some variety of Christianity. Historically, the percentage was far higher; now the religious landscape of Australia is changing and diversifying.

The name Australia is derived from the Terra Australis ('southern land'), a name used for a hypothetical continent in the Southern Hemisphere since ancient times. When Europeans first began visiting and mapping Australia in the 17th century, the name Terra Australis was naturally applied to the new territories.

Until the early 19th century, Australia was best known as New Holland, a name first applied by the Dutch explorer Abel Tasman in 1644 (as Nieuw-Holland) and subsequently anglicised. Terra Australis still saw occasional usage, such as in scientific texts.

The name Australia was popularised by the explorer Matthew Flinders, who said it was 'more agreeable to the ear, and an assimilation to the names of the other great portions of the earth'.

The first time that Australia appears to have been officially used was in April 1817, when Governor Lachlan Macquarie acknowledged the receipt of Flinders' charts of Australia from Lord Bathurst. In December 1817, Macquarie recommended to the Colonial Office that it be formally adopted. In 1824, the Admiralty agreed that the continent should be known officially by that name. The first official published use of the new name came with the publication in 1830 of The Australia Directory by the Hydrographic Office.

Colloquial names for Australia include "Oz" and "the Land Down Under" (usually shortened to just "Down Under"). Other epithets include "the Great Southern Land", "the Lucky Country", "the Sunburnt Country", and "the Wide Brown Land". The latter two both derive from Dorothea Mackellar's 1908 poem "My Country". Informal name for Australians is "Aussie", also spelled as "Ozzie".