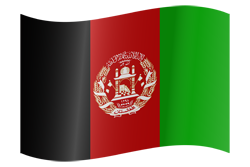 Motto: There is no God but Allah; Muhammad is the messenger of Allah

Afghanistan, officially the Islamic Republic of Afghanistan, is a landlocked country in South Asia. It is bordered by Pakistan in the south and east; Iran in the west; Turkmenistan, Uzbekistan, and Tajikistan in the north; and in the far northeast, Chine. Kabul is the capital and its largest city.

In 1838 the British marched into Afghanistan and arrested Dost Mohammad, sent him into exile in India and replaced him with the previous ruler, Shah Shuja. Following an uprising, the 1842 retreat from Kabul of British-Indian forces and the annihilation of Elphinstone's army, and the Battle of Kabul that led to its recapture, the British placed Dost Mohammad Khan back into power and withdrew their military forces from Afghanistan.

In 1878 the Second Anglo-Afghan War was fought over perceived Russian influence, Abdur Rahman Khan replaced Ayub Khan, and Britain gained control of Afghanistan's foreign relations as part of the Treaty of Gandamak of 1879. In 1893 Mortimer Durand made Amir Abdur Rahman Khan sign a controversial agreement in which the ethnic Pashtun and Baloch territories were divided by the Durand Line. This was a standard divide and rule policy of the British and would lead to strained relations, especially with the later new state of Pakistan.

After the Third Anglo-Afghan War and the signing of the Treaty of Rawalpindi on 19 August 1919, King Amanullah Khan declared Afghanistan a sovereign and fully independent state. He moved to end his country's traditional isolation by establishing diplomatic relations with the international community and, following a 1927-1928 tour of Europe and Turkey, introduced several reforms intended to modernise his nation.

A key force behind these reforms was Mahmud Tarzi, an ardent supporter of the education of women. He fought for Article 68 of Afghanistan's 1923 constitution, which made elementary education compulsory.

The institution of slavery in Afghanistan was abolished in 1923.