The Remarkable Prince of Royal Dignity and Respect 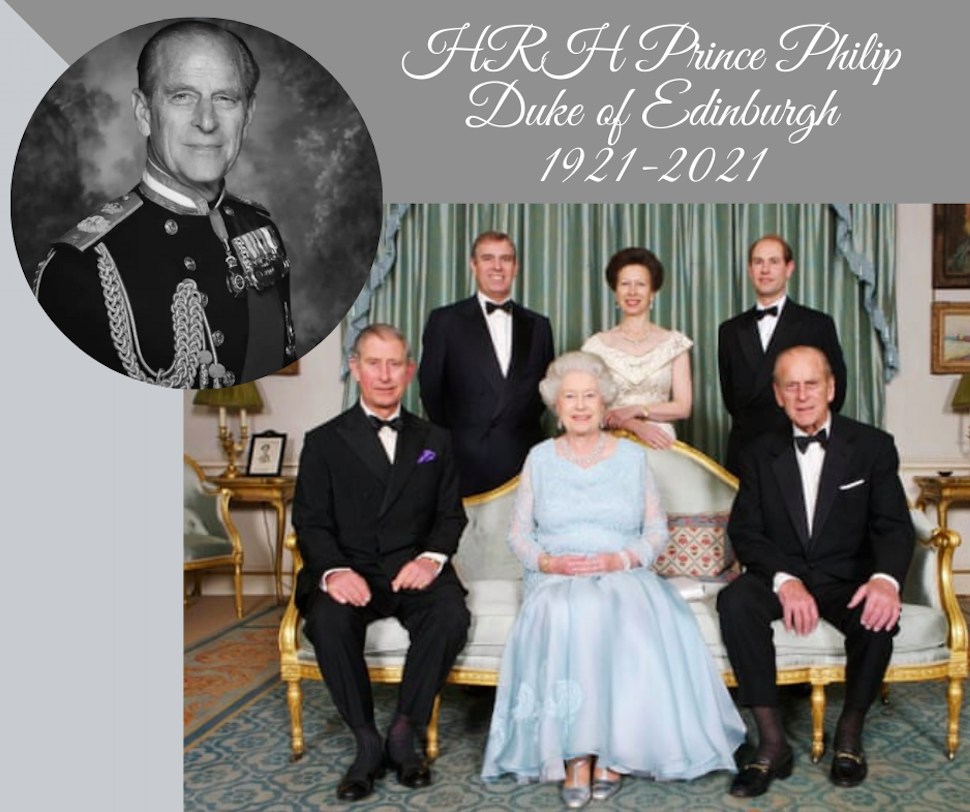 His Royal Highness Prince Philip, 99, passed away peacefully this morning at Windsor Castle.

An announcement about the death of Queen Elizabeth II's husband and her devoted companion for 73 years was made on the Royal Family's social media accounts as well as the Royal Family's official website. According to the tradition, an official notice of his death was posted on the railings of Buckingham Palace. However, it was removed shortly afterwards to avoid too many people gathering at the spot. Still, lots of public mourners head to Windsor Castle to put tribute notes and leave flowers all across the territory.

The Union flags fly half-mast from today until the morning after Prince Philip's funeral. On Saturday at noon local time, his death will be marked with a 41-gun salute, firing one round every minute in cities including London, Edinburgh, Cardiff, and Belfast, also from the warships HMS Diamond and HMS Montrose, and the Royal Gibraltar Regiment.

Duke of Edinburgh was the longest-serving royal consort in British history who played a key role in the development of the modern British monarchy. He stepped down from royal engagements in May 2017, joking that he could no longer stand up.

He made a final official public appearance later that year during a Royal Marines parade on the forecourt of Buckingham Palace in the pouring rain, devoted and true to his duty even in his 96 years. Since then, Prince Philip has rarely been seen in public, spending most of his time on the Sandringham estate in Norfolk.

Prince Philip's health had been slowly deteriorating for some time. On 16 February, he travelled from Windsor to London to be admitted to King Edward VII's hospital for treatment of infection and subsequently underwent heart surgery for a pre-existing heart condition at Bart's Hospital. On 16 March, Duke of Edinburgh was discharged and had returned to Windsor Castle to be reunited with the Queen.

Politicians across the United Kingdom are united in mourning after the announcement of Prince Philip's death. PM Boris Johnson led the tributes from the steps of Downing Street, praising Prince Philip's "extraordinary life".

The Speaker of the House of Commons, Sir Lindsay Hoyle, told the BBC Prince Philip was a "magnificent man" and in his statement, he added: "Today we must pause to honour him and to offer our sincerest thanks for the prince's devout faithfulness to our country - and all the nations shall miss him greatly".

Scotland's First Minister Nicola Sturgeon sent her condolences to the Royal Family. Labour leader Sir Keir Starmer said the UK had "lost an extraordinary public servant". Parties have suspended their election campaigning as a mark of respect, moving the date to 6 May to take place for the Scottish and Welsh parliaments, English councils, city mayors, and police and crime commissioners.

The Archbishop of Canterbury said in his statement about the much-loved Duke: "I join with the rest of the United Kingdom and the Commonwealth in mourning the loss of His Royal Highness Prince Philip, The Duke of Edinburgh, and give thanks to God for his extraordinary life of dedicated service... On the occasions when I met him, I was always struck by his obvious joy at life, his enquiring mind, and his ability to communicate to people from every background and walk of life. He was a master at putting people at their ease and making them feel special".

Key figures from around the world have expressed their condolences at the news. All five living former US presidents have paid tribute to the Duke of Edinburgh. Jimmy Carter the oldest living US president at 96, said in a tweet issued via the presidential library: “We are sorry to hear that Prince Philip, Duke of Edinburgh, has passed away”.

Donald Trump said: "The world mourns the passing of Prince Philip, a man who embodied the noble soul and proud spirit of the United Kingdom and the Commonwealth. Melania and I send our deepest and most profound condolences to Her Majesty Queen Elizabeth II, and to the entire Royal Family. We send our most heartfelt sympathies to the British people. This is an irreplaceable loss for Great Britain, and for all who hold dear our civilization".

Barack Obama tweeted: "Through his extraordinary example, His Royal Highness Prince Philip proved that true partnership has room for both ambition and selflessness — all in service of something greater. Our thoughts are with Her Majesty the Queen, the Royal Family, and the British people".

In a message on behalf of himself and his wife Laura, George W Bush said: "He represented the United Kingdom with dignity and brought boundless strength and support to the sovereign. Laura and I are fortunate to have enjoyed the charm and wit of his company, and we know how much he will be missed".

Bill Clinton wrote: "Hillary and I mourn the passing of His Royal Highness The Duke of Edinburgh, and we join people from all around the world in giving thanks for his remarkable life of service. We enjoyed every opportunity we had to visit with him through the years and will always be deeply grateful for the kindness he showed us".

The current president of the United States, Joe Biden said in his statement: "The impact of his decades of devoted public service is evident in the worthy causes he lifted up as a patron, in the environmental efforts he championed, in the members of the armed forces that he supported, in the young people he inspired, and so much more. Prince Philip’s legacy will live on not only through his family, but in all the charitable endeavors he shaped. Jill and I are keeping the Queen and Prince Philip’s children, grandchildren, great-grandchildren, and the people of the United Kingdom in our hearts during this time".

The BRAMS Institute team would like to pay respect to the late Duke of Edinburgh and express their heartfelt condolences to HM Queen Elizabeth, the members of the Royal Family, and the British people.

The Queen has approved the Prime Minister's recommendation of national mourning, which begins on 9 April and runs including the day of the funeral on 17 April. Instead of 800 guests considered to show up at the event originally, only 30 people will attend the ceremony, which will take place entirely within the grounds of Windsor Castle. The number excludes the bearer party and clergy. The Duke of Edinburgh's coffin will be transported from the castle to St George's Chapel, Windsor Castle, in a specially modified Land Rover and followed by the Prince of Wales and senior royals on foot. A national minute's silence will be observed as it begins at 3:00 pm.

Recalling the life of Prince Philip (by BBC)