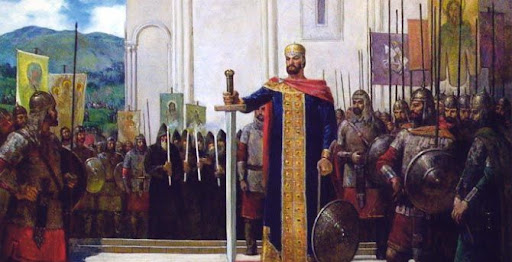 The Battle of Didgori was fought between the armies of the Kingdom of Georgia and the Great Seljuq Empire 40 km west of Tbilisi, at the mountainous plateau with the narrow gorge that made it difficult for the numerous Muslim army to maneuver. The Georgian King chose wisely the battlefield as he had intel his army would be facing significantly numerous enemy forces, and David IV did his best to give the Georgian army strategic and tactical advantages.

According to Matthew of Edessa, the Georgian army of 56,000 men consisted of 40,000 Georgians – including 5,000 well-trained and heavily armored horsemen with lances and bows that formed the royal guard known as Monaspa – and 15,000 Kipchaks, 500 Alans, and 100 Franks (Crusaders). During the battle, King David IV commanded the left wing of his army while Crown Prince Demetrius led the right.

The size of the Muslim army is a matter of debate, with numbers ranging from 600,000 men – as named by Walter the Chancellor and Matthew of Edessa –  to 400,000, according to the Chronicles by Sempad Sparapet. Modern Georgian historians suppose the Muslim coalition consisted of about 300,000 men only. Fact is, all sources indicate that the Muslim realms made massive preparations, and therefore, their coalition vastly outnumbered the Georgians. The Islamic forces included soldiers from Damascus, Aleppo, Malatya, Mayafarikin, Mardin, Arzen, Bitlis, Dvin, Hillah, Nakhichevan as well as military forces of Nomadic Arabs.

According to Walter the Chancellor, the French knight and historian, right before the battle, King David addressed the Georgian Army with an inspirational speech: “Warriors of Christ! If we fight bravely for our faith, we shall defeat not only the servants of the Devil but the Devil himself. And I advise you to do one thing which will be useful for our dignity and benefit: Let us raise our hands and make a vow to the Lord Almighty that we'd rather die for His love on this battlefield rather than run away from the enemy. In order to prevent a possibility of escape if someone might decide so, let's block the gorge behind us with the branches, and when the enemy approaches us to attack us, we shall attack them with a firm heart and ruthlessness!”

The large Muslim forces suffered a devastating defeat due to effective military actions provided by King David IV of Georgia who personally fought at the frontline until the enemy was defeated and Seljuks started fleeing the field. The Georgian cavalry followed the defeated army for several days and made sure the majority of the enemy was either dead or taken as hostages. Commander Ilghazi, wounded in the head, and about twenty of his warriors barely managed to escape capture. As the outcome of the Battle of Didgori, the entire region was liberated from Muslim influence for a few centuries.

According to the Arab historian al-'Ayni (1360–1451), the Georgian sovereign "respected the feelings of the Muslims" who lived in his realm. A highly-educated and wise ruler, King David IV abolished taxed for the Muslims and Jews and demanded tolerance to other religions from the Christians of the Kingdom.

The Battle of Didgori was the culmination of the Georgian-Seljuk wars that led to completing the unification of Georgia and the elimination of Muslim authority in the Christian Kingdom in 1122, when King David IV sieged and reconquered the royal city of Tbilisi, making it again the capital. Because of such a significant result at the battle of Didgori, The Georgian Chronicles named it a 'miraculous victory' (Georgian: ძლევაჲ საკვირველი).

The Georgians continue to commemorate this battle annually by festivity called Didgoroba (the day of Didgori) near the Didgori Monument.