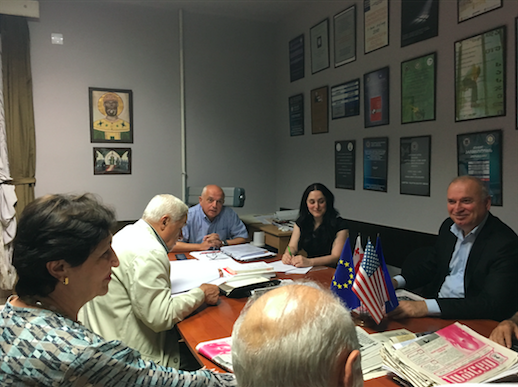 19 September 2018: A meeting of the science advisory board was held on Wednesday, at 17:00 in the Georgian Academy of Criminology.

The main goals of the Academy have been discussed and agreed upon as follows:

After presenting the minutes of previous meetings, the president of the Academy, Professor Malkhaz Badzagua introduced the agenda to the science advisory board members. A thorough discussion followed the terminology issues due to regional differences in the world of criminology.

International Relations Coordinator at the Georgian Academy of Criminology, Dr Maia Nadareishvili presented the results of her studies of the current situation at the criminology centres in the United States and European countries. For her final conclusions, she has also used the results of academic research conducted within BRAMS Institute projects. From the list of prospective candidates, Maia Nadareishvili appointed five professionals from the United States, Italy, Israel, Poland, and Slovenia for future cooperation and joint researches. Her recommendations have been approved by the science advisory board of the Georgian Academy of Criminology.

The scientific conference dedicated to the 100th anniversary of Georgian police forces was scheduled at the end of November 2018.

Call for submissions was announced for Issue 1(14) of the International scientific and practical journal Criminologist. Professor Malkhaz Badzagua gave a complete account of the current situation and introduced the list of the participants to the science advisory board members.

President of the Academy responded to all questions of Academy members effectively. Then he presented the results of his research and work with the experts of the discipline.

At the end of the session, Professor Malkhaz Badzagua introduced new plans to the fellow academicians. After a brief discussion, further activities have been decided.