Georgia is about quality, not quantity 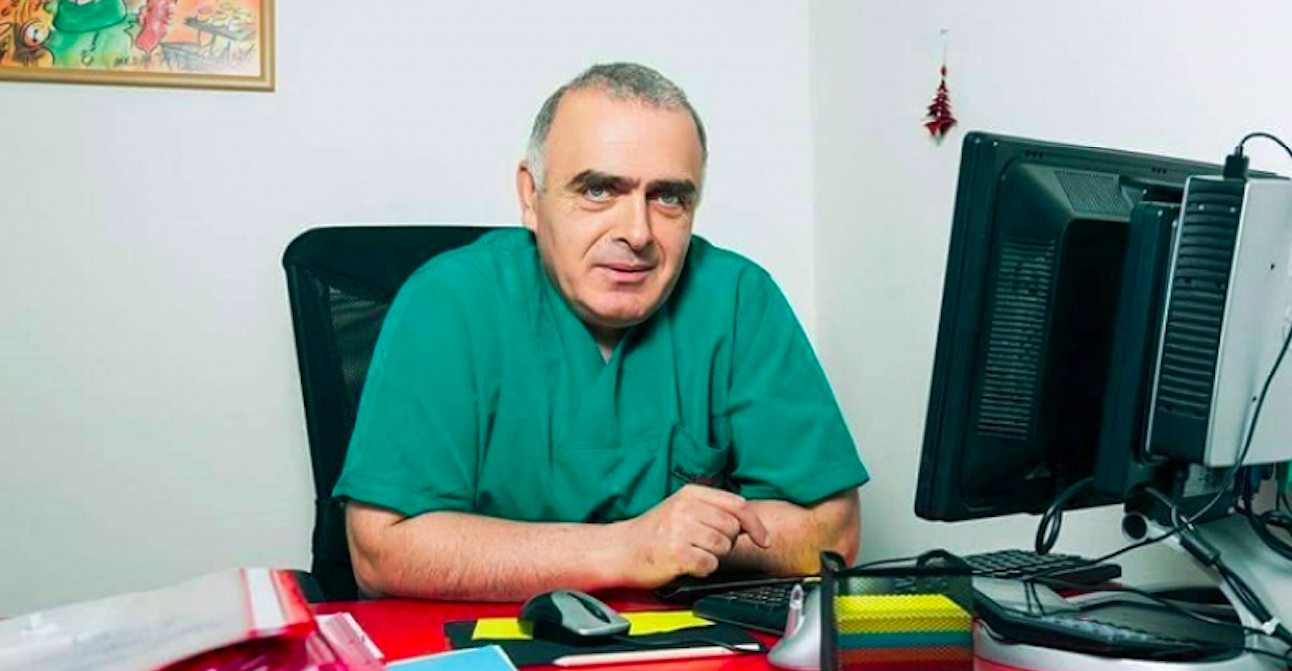 On 9 September 2019, the noted Georgian physician was illegally detained by separatists en route to a patient. Although the injured person lived on the territory of Georgia disputed by Russian-supported occupation forces, the president of the Association of Orthopedists and Traumatologists of Georgia, Vazha Gaprindashvili did not think twice and headed to visit the lady in need.

Tamar Gigauri, a school teacher who lives in Ikoti village of Akhalgori region controlled by Russian peacemakers, fell in the well. The relatives tried to transport her to Tbilisi but the occupational forces refused to let them pass. Instead, the severely injured patient was moved to Tskhinvali Hospital. When Doctor Gaprindashvili heard the story of the seriously injured teacher, he could not think about his safety and followed her relative without hesitation. The professor of Tbilisi State Medical University drove from Tbilisi to Samtavisi village where he met with the patient’s relative at 15:00. Afterwards, both disappeared without leaving a trail until 13 November when the Ossetian media released information about Vazha Gaprindashvili and his companion been arrested on a disputed territory between Ahmaji and Orchosani.

Tamila Lapanashvili, Doctor's wife, recalls the emotional reaction of her husband when he heard the news about the injured school teacher: "We discussed the news at home. I remember him expressing regret as he suspected the poor woman might have needed surgery since she apparently received many fractures. But he said nothing about a trip to the conflict zone". On 9 November the doctor called home round 15:30 to informed about been detained by the Russian militants. The Gaprindashvili family notified the Georgian law enforcement agency. However, the information about the arrest of the Georgian doctor remained undisclosed until 13 November. Later, a Georgian witness said the doctor told him he was arrested in Monasteri village.

Now Doctor Gaprindashvili is accused of illegal crossing so-called border, which remains unrecognised by all countries and organisations in the world but the Russian Federation (2008), Republic of Nicaragua, Bolivarian Republic of Venezuela, Republic of Nauru, Nagorno-Karabakh, Transnistria, and Syria (2018). Despite the Georgian and International requests, the courageous professional, who has a countless number of cured patients among Ossetians and Georgians on the occupied territory as he believes that there are no boundaries for doctors, now remains in custody and faces a two-month sentence in jail.

The Georgian population has never been more than 5.5 million through its history and currently, the number has fallen down two 3 million. Each time the world had a new invader, he never passed by this small country with too much to catch an eye and wish for yourself. No wonder that the locals say their history is the history of battles. The foreigners frequently wonder how the bunch of Georgians has managed to survive through everything, and some of them even offer a skeptical fortunetelling about our future. To give a couple of typical examples of what type of people the country survives on, Father Theodore (Tevdore Mgvdeli) and St Abo of Tbilisi could be named among thousands of other common heroes of Georgia. One was born Georgian, and another was born Arab Muslim.

Father Theodore was a priest of Kvelta village when in 1609 the Ottoman army intruded into the Kingdom of Kartli, looking for the Georgian King Luarsab II. The priest was unfortunate to be late for joining the evacuated villagers as he stayed to secure the holy icons from the Kvelta Church. The enemy ordered him to show the road towards the king's summer residence at Tskhireti Fortress. Perfectly aware of his fate for deceiving the invaders into thinking he was glad to help them for a reward, Father Theodore led their army in the opposite direction and away from the fortress. It took several hours to the Ottomans to realise the situation but it was too late by then: The 17-year-old King was informed about the invasion and well-prepared to face a battle thanks to the devoted priest. On 16 June 1609, the Georgian army guided by the brilliant Georgian general George Saakadze successfully defeated the joint forces of the Ottoman and Crimean Turks in the Battle of Tashiskari. The Georgian King and the Kingdom were thus saved. The furious Turks tortured and killed Father Theodore before the battle when ultimately they became aware of the trick the local priest pulled on them.

Saint Abo was born in 756 or 757, in Baghdad, and raised in a Muslim family. The young perfumer served to a Grand Duke of Kartli, Nerse Erismtavari while the Georgian nobleman was a political prisoner of the Caliph Abdillah. When the new ruler Mahdi permitted Nerse Erismtavari (705-742) to return to his homeland, young Abo followed the Georgian master to Kartli. They lived in the city of Tbilisi where Abo learnt the Georgian language and introduced himself into Christianity. Eventually, he decided to be baptised as a Christian, upsetting the Arabs living in Tbilisi. However, the tension grew when Abo started to preach Christianity among his fellow countrymen. Some Arabs tried to bribe him, others tried to scare him but none of them succeeded in convincing the young man to go back to his ancestors' belief. In the end, the Arabs captured and beheaded him, burnt the corpse and threw his remains into the River Kura on 6 January 786. The martyrdom of the young Arab Christian was depicted by John Sabanisdze, an 8-century Georgian cleric and writer. Later, Abo of Tbilisi was canonised and proclaimed the patron saint of the city of Tbilisi.

The history of Georgia is overcrowded by heroes like Father Theodore and St Abo. Each story is unique but the idea remains unchanged: they all sacrificed their lives for the country and its values. This is how Georgia survives. Right now the entire country keeps praying for the noble doctor, Vazha Gaprindashvili to be released and safely returned to his family as soon as possible. However, the brave man clearly follows the example of the reckless ancestors who had no fear when fate made them face the enemy. The Georgians never choose to die for something. They have the responsibility to survive. However, being Georgian has greater value than staying alive by betraying the Georgian values. An example was set many times through the history of Georgia but the events of 13 November 1227 are unique. This is the day when the hundred thousand Georgians refused to spit at and step on the holy icons of Saint Mary and Jesus Christ and then renounce Christianity. This was the condition offered by Jalal ad-Din Manguberdi, the last ruler of the Khwarezmian Empire, to the defeated citizens of Tbilisi City if they wanted to survive. Some accepted for the sake to stay alive but the vast majority of Tbilisians refused and have been beheaded on the bridge. The Hundred Thousand Martyrs of Tbilisi became the spiritual army of Georgia, protecting the capital city and the entire country. It is a heavy burden to feel the responsibility towards your country and its values as an heir of the army of Saints. At the same time, it helps to make the right choice easily. How could the noble doctor Vazha renounce the homeland on 15 November in front of the separatists' court while the spirit of those brave ancestors has been commemorated on 13 November 2019?

According to Doctor David Ghviniashvili who personally spoke to the eyewitnesses (whose identities cannot be exposed for the personal safety reasons) his colleague Vazha Gaprindashvili refused to speak the Russian language while standing on the Georgian soil, and he refused to recognise the occupation line as a new border between Georgia and the Russian Federation; Although he was promised to be released immediately if he rejected his words, he risked his safety for the things he believed. Whether all this is a crime or not, the fact is an unarmed physician who only intended to help an ill person has been arrested. This is happening in the twenty-first century by the separatists backed by the Russian officials who claim to be modern and civilised, serving justice and peacemaking purposes in the region. They obviously disagree but it seems impossible to define the action of the professional a crime when it meant simply giving medical treatment to a patient. Meanwhile, the condition of the ill-fated patient has worsened, according to her family members who still ask for permission to transport her to Tbilisi, Georgia.

The US Embassy to Georgia called for the immediate release of Doctor Vazha Gaprindashvili who was sentenced by the de facto authorities in Georgia's Samachablo (South Ossetia) region on 15 November to two months of pretrial detention: "Additionally, we again call for the immediate end to closures of the crossing points along the administrative boundary line. We reiterate our full support for the sovereignty and territorial integrity of Georgia within its internationally recognized borders. We once again urge Russia to fulfill all of its obligations under the 2008 ceasefire agreement, including the withdrawal of its forces to pre-conflict positions and the provision of free access for humanitarian assistance to these regions, as well to reverse its recognition of the Georgian regions of Abkhazia and South Ossetia as independent states", the official statement says.

Justin McKenzie Smith, the British Ambassador to Georgia, 'sincerely' hopes that reports that Doctor Vazha Gaprindashvili will be released soon are confirmed. "When access to healthcare and education is becoming critical for many in South Ossetia, hard to understand what Russia-backed de facto authorities gain by locking up medical professionals", he tweeted on 18 November.

Since the Red Cross is the only international organisation allowed to work in Tskhinvali by South Ossetian authorities, the Gaprindashvili family requested its International Committee for assistance.

On 18 November the Georgian doctors arranged the White Smock protest across the country in support of their colleague, Vazha Gaprindashvili. Representatives of one of the busiest professions decided to hold a 5-minute rally in front of the clinics and hospitals they work. Georgian Medical students joined the practitioners.

2,000 doctors from different cities and towns of Georgia gathered in front of their workplaces at 12 o'clock local time in support of their illegally detained colleague. 35 medical institutions participated in the movement "Freedom to Doctor Vazha". The five-minute silent protest sent the loud message to Russia, the separatist authority of South Ossetia, and the rest of the world. Then the professionals went back to their duty, healing damaged health and saving lives of multinational citizens of Georgia, including some Ossetians who hold a 9-day silence while a kind doctor Vazha remains in custody for trying to save a fellow citizen.

Although Vazha Gaprindashvili was sentenced to twenty-one months' imprisonment, the Georgian physician was pardoned on 28 December and released. After 50 days in captivity, he has been reunited with his family members and friends. Mr Gaprindashvili announced his special gratitude towards the Tskhinvali region population who supported him during the prolong captivity and apologised to the local people who have faced unpleasant circumstances because of supporting a Georgian doctor.

Doctor is home for Christmas